Warren said the Marines turned over their small arms to government officials before boarding a commercial flight from Sanaa.

Members of the embassy staff told Reuters that more than 20 vehicles were taken by the rebels after the Americans left Sanaa’s airport.

Late Tuesday, the State Department announced that the U.S. Embassy in Yemen had been closed and evacuated after much of the country was taken over by Shiite rebels last month.

In the wake of a takeover by Shiite rebels seizing power in Yemen, the US and UK close embassies in Sanaa. Diplomatic personnel relocated. (Feb 11) AP

Hours later, Britain and France followed suit and ordered their citizens to leave Yemen as soon as possible.

The U.S. embassy had already been operating with severely reduced staff for several weeks. State Department spokesman Jen Psaki said remaining diplomatic personnel had been relocated “due to the ongoing political instability and the uncertain security situation.”

Yemen has been in crisis for months, with Houthi rebels besieging the capital and then taking control and forcing the resignation of the U.S. and Saudi-backed president and his government.

“The security situation in Yemen has continued to deteriorate over recent days,” U.K. Minister for the Middle East Tobias Ellwood said in a statement. “Regrettably we now judge that our embassy staff and premises are at increased risk.” Ellwood also urged all British citizens still in Yemen to “leave immediately.” 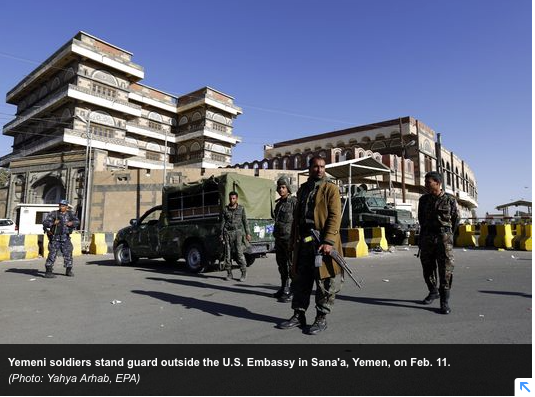 In a statement on its website, the French Embassy said it would close as of Friday.

The embassy closures were announced as Houthi rebels, armed with Kalashnikov assault rifles and dressed in police uniforms and civilian clothes, patrolled the main boulevards of the capital, Sanaa, some in pickup trucks mounted with anti-aircraft guns.

Scattered protests could be seen in the city, with demonstrators denouncing the Houthis for taking power and dissolving parliament. Shops closed early and helicopters also hovered overhead.

Houthis attacked one demonstration, stabbing and beating protesters trying to reach the local United Nations office, witnesses said. The rebels detained a number of people as well, they said.

Earlier Tuesday, U.S. officials told the Associated Press that the embassy closure would not affect ongoing operations against the terror group Al Qaeda in the Arabian Peninsula (AQAP).

“The United States remains firmly committed to supporting all Yemenis who continue to work toward a peaceful, prosperous and unified Yemen,” Psaki said. “We will explore options for a return to Sanaa when the situation on the ground improves.”

“We announce breaking the pledge of allegiance to the sheikh, the holy warrior and scholar Sheikh Ayman al-Zawahiri … We pledge to the caliph of the believers Ibrahim bin Awad al-Baghdadi to listen and obey,” they reportedly said.

Two U.S. officials said Marines providing the security at the embassy will also likely leave, but American forces conducting counterterrorism missions against Al Qaeda’s Yemen affiliate in other parts of the country would not be affected. The U.S. officials spoke on condition of anonymity because they were not authorized to discuss the closure publicly on the record.

Although operations against AQAP will continue, the closure of the embassy will be seen as a blow to the Obama administration, which had held up its partnership with ousted Yemeni President Abed Rabbo Mansour Hadi’s government as a model for his strategy in combatting terrorism, particularly in unstable countries.


Previous [NSFW] What better than Some Naked Gals to Help Everyone Understand Net Neutrality? !!

Next Ebola Aid Workers Under Attack, While Attempting To Squash Ebola...