MONESSEN, Pa. – A parent of a Pennsylvania middle-schooler is outraged after his son was given a “Fifty Shades of Grey” word search assignment containing explicit sexual terms.

Carter told board members he first attempted to discuss the issue with principal Eric Manko and dean of students Don Madzey, but they refused because he wanted to record the conversation. 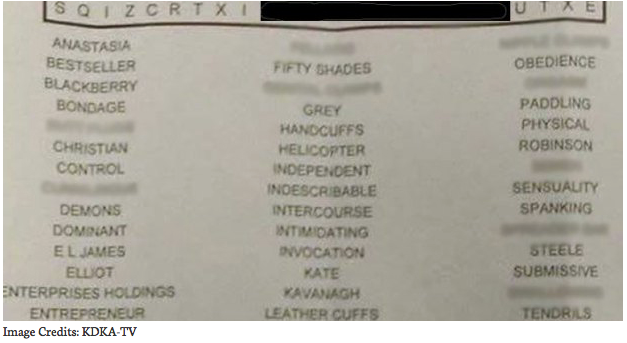 “I wanted to record the conversation because a lot of parents had questions about it, and I was denied that,” he told board members, according to the news site. “So I guess I come here today to find out the timeline and how it happened.”

Unfortunately, officials provided few details. Board president Donna Fatauzzi described the issue as “a personnel and student matter,” and essentially told Carter to trust school officials to take care of it.


“As a parent, I can understand your concern,” Fatauzzi told Carter, “and I can assure you we value your comments and we will handle it the best we can.”

Fatauzzi referred further comment to a school spokesman, who said the district’s investigation into the assignment was “too preliminary” to discuss, including details about who assigned the word search, the number of students who received it, or whether the person responsible will be disciplined, Fox 8 reports.

“The district learned of this yesterday and is trying to gather all the facts so it can be treated fairly and expeditiously,” solicitor John Toohey said Tuesday evening, according to TribLive.com.

Many parents were outraged by the assignment, and didn’t appreciate having to explain terms like “butt plugs” to their 12-year-olds.

“Definitely not acceptable for any school-aged kids!” Tina Klinger posted.

“Good grief!” Ginger Cozee wrote. “What is going on in school these days?!”

“Nothing like that should be brought into the school at all,” Jennifer Kennedy commented. “Keep it I our car or at home.”

One school board member who didn’t attend the recent meeting, Roberta Bergstedt wrote in an email to WTAE-TV that the word search was “a huge but unintentional error and collected from five students involved as soon as it was realized.

“Unfortunately one copy was taken by a student who then posted it on social media.”


Previous [VIDEO] This Judge in Texas Has The balls to Stand up to Obama, and His Phone and Pen

Next Coach in school bus crash: 'We were involved in a miracle'