Kirsty Kennedy weighs 308lbs and she claims she’s unable to get a job due to being “too fat” to work.

In a span of seven years she’s never held a full-time job and has been collecting government benefits, at the expense of the taxpayer, the entire time. However, she claims that she’s attempted getting a job but is always rejected which she believes is a direct result of being overweight. As a result, she lives with her unemployed, overweight parents and admits to hiding chocolate under her bed for late-night binges. 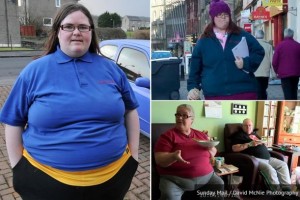 “I’ve applied for Poundland. I think Iceland are getting fed up  with me asking all the time but I am just getting to the point I’ll just take anything,” Kennedy, who does volunteer work delivering food to the elderly, said. “I think people just look at me  and think, ‘Oh, she’s too heavy and  we cannot take her.’ I am willing to get a job. I am trying to tell people I am here and give me a chance.”

Kennedy also believes that employers are turned off by her mild learning disability, which she was diagnosed with at age 18.


“When I go into a shop with my CV,  I just get a feeling that people look  at me and will put it straight in the  bin. And then when I mention the  disability, I think they won’t give me the job. But it’s about what a person can bring to a job,” she said. “I think they just look at me and think, ‘She’s a fat lass’. I think people need to learn not to judge a book by its cover.”

According to Kennedy, a thyroid problem has contributed greatly to her weight issues.

“I’m on medication because of my thyroid so I have to work twice  as hard as someone else to start seeing the results in my weight loss,” she said. “But even if I lose a pound or two, the doctor does encourage me. It’s  going slowly but it is going in the right direction. I have good days and bad days —  too many packets of crisps and too much chocolate.”

Kirsty’s 57-year-old mother of four, Rosie, said she had previously held a job but the fat gene ran in the family, but denied the family were scroungers.

“You see big  women working in supermarkets. I have been big for a long time. I worked in fields and factories  and I did that for 14 years,” she said. “I’m just fat. I won’t lie. I eat all the wrong things. I don’t eat big meals but I do eat the  wrong things. I did manage to lose three stones. But I buy veg and then it doesn’t get  used and it’s a waste of money.

“I know I could get up and go out  there for a walk. But I can’t be bothered. It’s laziness,” Rosie added. “But we’re are not scroungers. If we don’t have a penny we go without.”