An Air Force Reserve captain whose family believe she was sexually assaulted in Afghanistan killed herself using her handgun.

Jamie Brunette, from Tampa, Florida, was found dead on February 9 by Tampa police in the back of her locked sedan near her apartment.

The news shocked her family as Brunette, who left active duty after 11 years last June and joined the Air Force Reserve, had not shown any signs of being suicidal and was in the middle of opening her new fitness business. 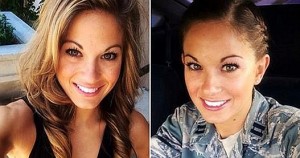 It appears the 30-year-old killed herself with her Smith & Wesson .380 handgun, which she purchased about six months earlier according to police, reports the Tampa Tribune.

‘She had so much going for her,’ says Jackie Leverich, 40, Brunette’s oldest sister.

‘She was so full of hope and wonderment and passion and excitement for life.’

But Leverich says she believes something traumatic happened to her sister in Afghanistan, saying the family noticed a change in Brunette on her return at her sister’s wedding.

‘She seemed upbeat,’ says Leverich, ‘but she wasn’t really giving us a whole lot of detail about life and what was going on.’