A photo of a receipt allegedly belonging to a member of the military is quickly spreading across social media due to the reason the soldier chose not to tip his server.

The photograph, which was posted on “Ranger Up Military and MMA Apparel” Facebook page, shows the receipt from a Red Robin restaurant and nothing left for a tip, with the photo caption “Don’t Be That Guy.”

Rather than leave it at that, the patron left a note on the receipt as justification for not tipping his server.

“My tip is the freedom I provided you while serving my country. You’re welcome for my service.” 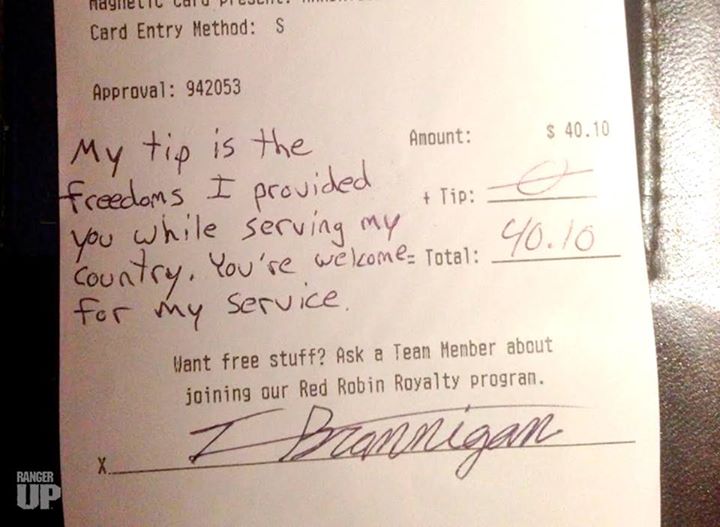 The image has spread quickly across social media, with most people being outraged that a member of the military would conduct themselves in such a disrespectful manner.

“What a douche. I always tip and on Veterans Day when meals are free I tip the whole amount of the meal to the waiter.” one commenter wrote. “Hate douchebags like that.”

“Dickhead…what’s a few more bucks?” another noted.  “If you can’t afford a tip don’t go to a restaurant,go to freakin’ McDonald’s.”

What do you think of this soldier’s decision not to tip and his reason behind it?