Dogs are known as man’s best friend, but they make sure to look out for their fellow canines as well.

A tiny dachshund named Razor helped alert a passersby in Belen, New Mexico, to the fact that his 180lb friend Jazzy, a St Bernard, was stuck two feet in the mud. 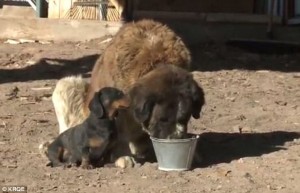 Owner Tim Chavez believes that the nine-year-old large dog was stuck in a muddy irrigation ditch for 18 hours after she ran away from home, and as their owner Tim Chavez was getting ready to go to work, he noticed that Razor was acting different, according to KRQE.

“I went to feed him, and he was kind of going crazy, trying to get my attention,” Chavez explained.


After Chavez left for work, a passer-by driving on the road adjacent to the ditch heard the barking, looked down and saw Razor next to the immobilized Jazzy. 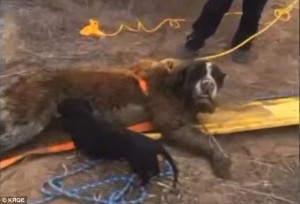 “It’s never happened in my career, and in this business, we see a lot of things. This is the first time that we participated in something like this,” Belen Fire Chief Manny Garcia told KRQE. “This is a great story. One I think that is very unique, and one that animal lovers across our state will love. We’re used to rescuing humans, and when it comes to somebody’s pet, it’s just like a family member. What makes it unique is the people in Belen care for each other.”

Chavez says he is happy that Jazzy is doing well and is thankful for Razor’s persistence and bravery.

“It really means a lot,” Chavez said. “You don’t really realize how attached you are to your pets until something like this happens.”