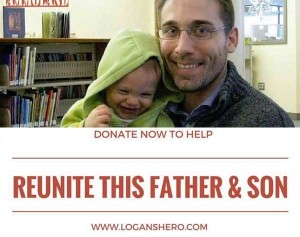 I am writing to let your patriotic readers know that Facebook is banning me from promoting posts that lead to my crowdfunding site, www.loganshero.com, including a picture of me holding my infant son.

My crowdfunding campaign, which does not sell firearms or weapons of any kind, exists to help me raise funds to regain custody of my son, who was taken from me by NJ courts because I was a gun owner.

Several of my posts have been suppressed by Facebook and a picture of me with my son was blocked by Facebook as a promoted post because Facebook’s Advertising guidelines ban any ads that promote “the sale or use of weapons, ammunition, or explosives.”

Above is the picture of me with my son that Facebook banned as promoting “the sale or use of weapons, ammunition, or explosives”

SIDE NOTE: The New Jersey Second Amendment Society has also been having their ads blocked by Facebook over the past two days, likely because they advocate for the safe and legal use of firearms and their support of Brain.

Brian Aitken wrote: HELP REUNITE ME WITH MY SON BY DONATING AT WWW.LOGANSHERO.COM.

In 2010 I was sentenced to seven years in prison for possessing firearms I owned legally. Before even being convicted, a New Jersey Family Court judge took my son from me because he felt gun owners were unfit to be parents.

Brian D. Aitken is the author of “The Blue Tent Sky: How the Left’s War on Guns Cost Me My Son and My Freedom” (http://tiny.cc/ynw3mx)

“Brian Aitken’s memoirs show the dark side of a liberal desire to make the world safer.” – Reason Magazine