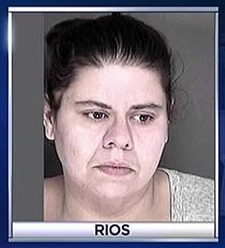 Rosa Rios, 33, of Millville, New Jersey, was arrested Friday and charged with robbery and theft while employed as as a bus aide for the Sheppard Bus Service.

A Millville Police Officer said she was looking over surveillance footage from a school bus in the company back on Feb. 4 while investigating whether money was stolen from the bus driver.

It was then that she saw Rios on camera rummaging through the students’ backpacks. In all, Rios stole lunch money and bagged lunches from 29 kids between the ages of three and five, according to investigators.

Rios’s employment was terminated after the crime had been discovered and is currently being held in Cumberland County Jail in lieu of $50,000 bail. Sheppard Bus Service is working with authorities to obtain more surveillance footage.

Next POLICE: Couple Left Baby Outside In Freezing Minivan While They Had Kinky Sex In Home Filled With Feces