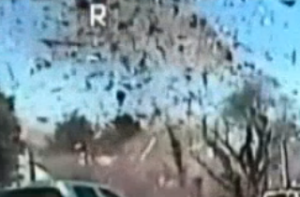 A police dashcam caught an insane explosion of a New Jersey home on Tuesday that literally shook the surrounding area. The house, in Ocean County, went up in a giant gas explosion, shortly after police arrived on the scene in response to calls about a strange odor.

There was a gas leak, and the result was a giant explosion that destroyed the one house and sent debris flying. Some other houses were damaged and a few gas workers and firefighters were injured.

The blast reportedly had a one-mile radius and law enforcement warned everyone about avoiding the immediate area, even taking the precaution of shutting off gas and electricity to many other houses.

You can watch the police dashcam footage here, via NBC Philadelphia: