According to police reports, retired White Plains police officer Glen Hochman shot and killed his daughters Alissa, 18, and Deanna, 13, and the family’s three dogs on Saturday before turning the gun on himself and taking his own life.

Harrison police Chief Anthony Marraccini said that 52-year-old Glen Hochman and his wife, Anamarie, had recently had “a family discussion” about separating but he declined to say whether or not the discussion about separating was considered a motive in the killings. 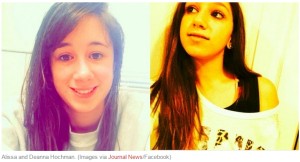 What chief Marraccini did reveal was that only a day previous to the murder suicide, his wife Anamarie filed a police report due to what she described as a nonviolent argument over an $80 cellphone bill.

He went on to say that she request the police not follow up but merely wanted to “document” the altercation and no charges were filed.

“She described it as a verbal argument only,” Marraccini said. “There was no representation of any violence.”

“She didn’t want us to pursue it, she just wanted to document it,” the chief said.

In the video below, neighbors of the Hochman family share their reactions and recollections a day after Glen Hochman, a retired White Plains police officer, killed two of his daughters before taking his own life. (Video by Seth Harrison/The Journal News)

Hochman recently retired after being employed with the White Plains police department for 22 years. The police commissioner issued a statement upon hearing of the tragic incident and called the deaths “an unfathomable tragedy.”


Previous [PHOTOS] This Dog Had A Very Bad Day, and Learned A Very Painful Lesson