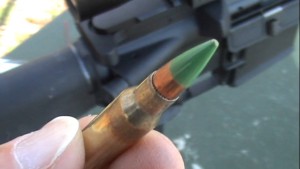 The ban is completely lawless and unconstitutional, and there are legislators who want to fight the ban.

At least one Republican office is considering an amendment to block Obama’s illegal AR-15 ammunition ban by attaching it to the Department of Homeland Security (DHS) funding bill.

But if you’ve been watching the news, you know that there is a royal battle right now over this bill because of Obama’s Executive Amnesty, something that GOA has reported on before.

Click here to contact your Senators and Represenatative and urge them to support a repeal of ATF’s AR-15 ban.

To provide some context, Barack Obama initiated the controversy by unconstitutionally and unlawfully using “executive action” to give amnesty to 5,000,000 people illegally in this country.

How do we know it’s illegal? Because Barack Obama himself had said repeatedly that it would be illegal, and now a federal court has said the same.

And, to give you a sense of what stake the Second Amendment community has in this battle, we will quote liberal anti-gun Oregon Democratic Congressman Kurt Schrader, who confidently opined that this fight “will decide who is in charge of this country for the next 20 or 30 years.”

In other words, if you add another 5-8,000,000 anti-gun voters to the rolls, we can kiss the Second Amendment good-bye.

But, to get back to our story, Obama “decreed” an amnesty last year which he himself had pronounced unlawful.

And his primary (unspoken) defense was that the Police Chief (Eric Holder) worked for him and the newly-packed federal courts would, generally, do what he told them to do.

In December, Republicans had their best chance to defeat Obama’s Executive Amnesty. But as many of you will remember, House Speaker John Boehner caved and said that Republicans would fight the battle in February.

Well, we warned Republicans in December that the fight to kill the anti-gun amnesty would be a lot harder if they put it off until February (this week).

After all, we know that if Republicans send Obama a DHS funding bill with NO monies for amnesty, that the President will veto it. And this, of course, means that the Department of Homeland Security sends all non-essential employees home.

How does that help the cause, knowing that in order to defeat amnesty, we’re refusing to pay our border agents? We simply chop off our nose to spite our face.

Making the best out of a less than ideal situation, the House of Representatives has now used its “power of the purse” to do one simple and obvious thing: The House-passed appropriations (money) bill funded all of America’s security operations, with the sole exception of Obama’s admittedly unconstitutional amnesty. And it sent the bill to the Senate.

Enter Senate Minority Leader Harry Reid. Reid has been whining about Republican filibusters for the last six years. But, now that the shoe is on the other foot, Reid has no problem with blocking the Senate from even proceeding to the bill.

And this was the case even though Republicans were prepared to allow Reid to offer amendments — a courtesy Reid never gave Republicans when he was in charge.

And, incidentally, even though it is Reid who is filibustering, a “lap-dog” press has no problem paradoxically blaming the GOP for holding up the bill.

So McConnell surrendered. His “compromise” would send Barack Obama a “clean” appropriations bill which fully funds Obama’s illegal amnesty. Sure, he has a “sham” companion bill, but that bill will be vetoed and the veto sustained.

Furthermore, in order to avoid forcing Democrats to vote on “uncomfortable” issues, McConnell is offering to use a parliamentary tool to shut out all pro-gun amendments.

Why is this important? It’s important because at least one Republican office is considering an amendment to block Obama’s illegal AR-15 ammunition ban. McConnell’s “compromise” would prevent this amendment from being offered.

So, now that McConnell is lying on the floor (metaphorically) and allowing Obama to kick him in the face, Reid should be satisfied, right?

About:Gun Owners of America (GOA) is a non-profit lobbying organization formed in 1975 to preserve and defend the Second Amendment rights of gun owners. GOA sees firearms ownership as a freedom issue. `The only no comprise gun lobby in Washington’ – Ron Paul Visit: www.gunowners.org to Join.

Next NEW YORK TIMES REPORT: AR-15 Ammo Ban Has Been in The Works By The ATF For Years