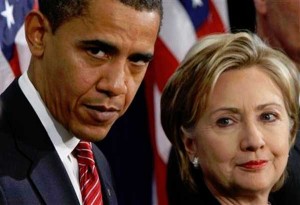 Why else would Hillary Clinton personally send out lies about Benghazi within hours, and then keep on pushing these lies until the truth could no longer be ignored.  The truth about an attack by an al Qaeda group that killed our ambassador and three other brave Americans in the days before Obama’s reelection would not only have put Obama at risk of losing, but also would have potentially dashed the hopes of his successor-in-waiting, Hillary Rodham Clinton.

The desperation by Obama, Clinton, and their political teams must have been potent.  It was so potent that they – rather than admitting to the Islamist conflagration they caused in Libya by ousting and killing Gadhafi – preferred to ignore pleas for increased security from Ambassador Stevens; to abandon him and his colleagues to rampaging terrorists; refuse to follow up with force against those who attacked us; and to lie to the American people about the nature of the attack.

Rather than admit that it was a planned attack by a terrorist group in league with al Qaeda, the Obama/Clinton machine knowingly put out the lie that the killings were the result of a spontaneous demonstration in response to an obscure Internet video supposedly offensive to radical Islamists.  The message: don’t blame us – blame those who offend Islamists (conservatives, Republicans, etc.).  Indeed, rather than sending our military to eliminate the enemy in Libya, the Obama administration arrested the poor sap who made the offending video.

Strong stuff you might think.  But the most recent documents forced out of the State Department will make you think I’m being too kind to the Benghazi betrayers controlling the Executive Branch.

On February 11, 2015, JW struck smoking-gun gold in another cache of documents we forced out of the State Department.  The documents show that top aides for then-Secretary of State Hillary Clinton, including her then-chief of staff Cheryl Mills, knew from the outset that the Benghazi mission compound was under attack by armed assailants tied to a terrorist group.  The documents we’ve extracted from the Obama administration only through a Freedom of Information Act lawsuit against the State Department.

Unsurprisingly, the documents make no reference to a spontaneous demonstration or Internet video, except in an official statement issued by Hillary Clinton.

The JW lawsuit that uncovered this material focused on Mrs. Clinton’s involvement in the Benghazi scandal:

Any and all records concerning, regarding, or related to notes, updates, or reports created in response to the September 11, 2012 attack on the U.S, Consulate in Benghazi, Libya. This request includes but is not limited to, notes, taken by then Secretary of State Hillary Rodham Clinton or employees of the Office of the Secretary of State during the attack and its immediate aftermath.

Mrs. Clinton had said she took notes on Benghazi for her recent book but suggested no one could see them.  She isn’t above the law.  Congress is asleep, the media is a cheerleader, so hence, our lawsuit.

We haven’t yet gotten Hillary’s notes, but the chain of internal emails we did get are extraordinary and track the events surrounding the terrorist attack in real time.

On September 11, 2012, at 4:07 PM, Maria Sand (who was then a Special Assistant to Mrs. Clinton) forwarded an email from the State Department’s Operations Center entitled “U.S. Diplomatic Mission in Benghazi is Under Attack (SBU) [Sensitive But Unclassified]” to Cheryl Mills (then-Chief of Staff), Jacob Sullivan (then-Deputy Chief of Staff for Policy), Joseph McManus (then-Hillary Clinton’s Executive Assistant), and a list of other Special Assistants in the Secretary’s office:

The Regional Security Officer reports the diplomatic mission is under attack. Tripoli reports approximately 20 armed people fired shots; explosions have been heard as well. Ambassador Stevens, who is currently in Benghazi, and four COM [Chief of Mission] personnel are in the compound safe haven. The 17th of February militia is providing security support.

This email was sent about 30 minutes after the terrorist attack began!

On September 11, 2012, 4:38 PM, State Department Foreign Service Officer Lawrence Randolph forwarded Mills, Sullivan and McManus an email from Scott Bultrowicz, who was the former director of the Diplomatic Security Service (ousted following review of the attack), with the subject line, “Attack on Benghazi 09112012″:

DSCC received a phone call from [REDACTED] in Benghazi, Libya initially stating that 15 armed individuals were attacking the compound and trying to gain entrance. The Ambassador is present in Benghazi and currently is barricaded within the compound. There are no injuries at this time and it is unknown what the intent of the attackers is. At approximately 1600 DSCC received word from Benghazi that individuals had entered the compound. At 1614 RSO advised the Libyans had set fire to various buildings in the area, possibly the building that houses the Ambassador [REDACTED] is responding and taking fire.

Nearly seven hours later, at 12:04 am, on September 12, Randolph sends an email with the subject line “FW: Update 3: Benghazi Shelter Location Also Under Attack” to Mills, Sullivan, and McManus that has several updates about the Benghazi attack:

I just called Ops and they said the DS command center is reporting that the compound is under attack again.  I am about to reach out to the DS Command Center.

This email also contains a chain of other, earlier email updates:

September 11, 2012 11:57 PM email:  “(SBU) DS Command reports the current shelter location for COM personnel in Benghazi is under mortar fire.  There are reports of injuries to COM staff.”

September 11, 2012, 4:54 PM: “Embassy Tripoli reports the firing at the U.S. Diplomatic Mission in Benghazi has stopped and the compound has been cleared. A response team is on site to locate COM personnel.”

Embassy Tripoli confirms the death of Ambassador John C. (Chris) Stevens in Benghazi. His body has been recovered and is at the airport in Benghazi.

Two hours later, Joseph McManus forwards the news about Ambassador Stevens’ death to officials in the State Department Legislative Affairs office with instructions not to “forward to anyone at this point.”

Despite her three top staff members being informed that a terrorist group had claimed credit for the attack, Secretary of State Hillary Clinton, issued an official statement, also produced to Judicial Watch, claiming the assault may have been in “a response to inflammatory material posted on the Internet.”

Cheryl Mills asks that the State Department stop answering press inquiries at 12:11 am on September 12, despite the ongoing questions about “Chris’ whereabouts.”  In an email to State Department spokesman Victoria Nuland, Jacob Kennedy, and Phillipe Reines (then-Deputy Assistant Secretary of State for Strategic Communications and Senior Communications Advisor), Mills writes:

Can we stop answering emails for the night Toria b/c now the first one [Hillary Clinton’s “inflammatory material posted on the Internet” statement] is hanging out there.

Earlier in the chain of emails, Nuland told Mills, Sullivan, and Patrick Kennedy (Under Secretary of State for Management) that she “ignored” a question about Ambassador Steven’s status and whereabouts from a CBS News reporter.

Think about this:  Cheryl Mills, Hillary’s top aide, would rather go to bed and let hang out there the lie that Hillary Clinton put out about the attack than tell reporters the truth about the attack, which by that time had escalated to include mortar fire.

Another top State Department official is eager to promote a statement from Rabbi David Saperstein, then-Director of the Religious Action Center of Reform Judaism, a liberal group.  The September 2012 statement condemns “the video that apparently spurred these incidents. It was clearly crafted to provoke, offend, and to evoke outrage.” Michael Posner, then-Assistant Secretary of State for Democracy, Human Rights and Labor, forwarded the statement on September 12, 2012, to Wendy Sherman, Under Secretary of State for Political Affairs, and Jacob Sherman with the note:

This is an excellent statement – our goal should be to get the Conference of Presidents, the ADL etc. to follow suit and use similar language.

(President Obama nominated the left-wing Rabbi Saperstein to be Ambassador-at-Large for International Religious Freedom in July 2014.  The U.S. Senate confirmed him in December 2014.  Posner, by the way, is another far left activist installed at State by Obama.)

Also included in the documents are foreign press reports establishing the cause of Ambassador Chris Steven’s death as being from asphyxiation. According to the reports, doctors attending Stevens said he could have been saved had he arrived at the hospital earlier.

The Obama administration has blacked out reactions from White House and top State Department officials to news stories published on September 14, 2012.  One of the stories quoted a visitor who criticized the lack of security at the Benghazi Special Mission Compound and another headlined, “America ‘was warned of attack and did nothing.’”  What was the reaction of key Obama officials to this truth-telling about the media.  They don’t want you to know.  If it were helpful, it would have been released to us!

Other emails list well over 20 invited participants in a “SVTC” (secure video teleconference).  The invited participants for the September 14, 2012, early morning call include senior White House, CIA, and State Department political appointees.  Details about that call, which likely documents the cover-up operation on Benghazi, haven’t been produced to Judicial Watch.

These emails leave no doubt that Hillary Clinton’s closest advisers knew the truth about the Benghazi attack from almost the moment it happened.  And it is inescapable that Secretary of State Hillary Clinton knowingly lied when she planted the false story about “inflammatory material being posted on the Internet.”

The contempt for the public’s right to know is evidenced not only in these documents, but also in the fact that we had to file a lawsuit in federal court to obtain them.  The Obama gang’s cover-up continues to unravel, despite its unlawful secrecy and continued slow-rolling of information.

Congress, if it ever decides to do its job, cannot act soon enough to put Hillary Clinton, Cheryl Mills, and every other official in these emails under oath.

Islamic terrorists connected to al Qaeda attacked the U.S. diplomatic compound in Benghazi on the evening of September 11, 2012.  U.S. Ambassador J. Christopher Stevens and U.S. Foreign Service Information Management Officer Sean Smith were both killed. Just a few hours later, a second terrorist strike targeted a different compound about one mile away. Two CIA contractors, Tyrone Woods and Glen Doherty, were killed and 10 others were injured in the second attack.

The families of those four men deserve truth and accountability. So do those who suffered injuries and others haunted by the attacks.

So as “Rome burns,” your Judicial Watch will, alone it seems, continue with the hard work of conducting government oversight in a city otherwise bereft of it.  The Benghazi Four deserve no less.

We expect more Benghazi documents over the next few months, so stayed tuned for more disclosures. 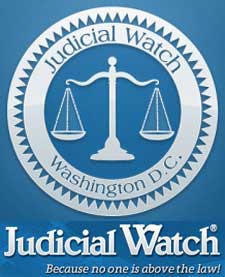 About Judicial Watch:
Judicial Watch, Inc., a conservative, non-partisan educational foundation, promotes transparency, accountability and integrity in government, politics and the law. Through its educational endeavors, Judicial Watch advocates high standards of ethics and morality in our nation’s public life and seeks to ensure that political and judicial officials do not abuse the powers entrusted to them by the American people. Judicial Watch fulfills its educational mission through litigation, investigations, and public outreach. Visit: www.judicialwatch.org

“Because No One Is Above The Law”


Previous Bodybuilder Mr. Utah Learns A Painful Lesson After Challenging A Much Smaller Man To A Fight [VIDEO]

Next Will Obama be Forced to Swallow a Repeal of the AR-15 Ammo Ban?