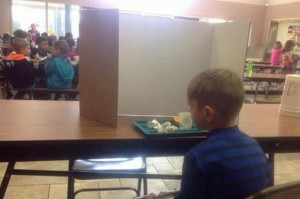 The parents of first-grader Hunter Cmelo in Grants Pass, Oregon, are outraged after their six-year-old son’s school teacher forced him to eat lunch alone behind a cardboard divider, simply because he was one minute late for school.

His mother of  snapped photos of him sitting isolated from the other children during lunch at Lincoln Elementary School. His grandmother posted the photos to Facebook and since that time, they have been shared thousands of times and hundreds of complaints have since poured in to the school district.

In the photos, Hunter sits next to a cup with the letter “D” for “detention,” as he looks at the other children’s lunch tables.

Hunter’s family says he was humiliated and left crying from the embarrassing public shaming.

Lincoln Elementary School officials explained that the cardboard barrier is part of the principal’s punishment for students who are regularly late for school.

Hunter’s family says he has been tardy several times recently because of his mother’s health issues and car trouble, and it’s obviously not the six-year-old’s fault.

‘They are shaming him for something that’s not in his control,’ his father, Mark Cmelo, told KOIN6. ‘It is our fault that he is late.’

His mother, Nicole Garloff, said the punishment has left her son anxious about going to school, and that a few days ago, he began ‘flipping out’ because they were running late.

She said that she has experienced car troubles and suffers from osteoporosis, which can set her back in the mornings.

‘It causes a lot of pain and in the mornings it’s especially hard for me to get going,’ she said.

According to Newswatch 12, school superintendent John Higgins and principal Missy Fitzsimmons started receiving threatening calls after the photo was shared on Facebook.

After receiving many complaints, the school released a statement, saying, “This afternoon, Principal Fitzsimmons was able to meet with both parents to discuss their concerns. We are pleased to report the meeting was productive. The parents’ concerns were politely discussed and, ultimately, the issues were resolved.”

Watch the outrageous clip from “Fox and Friends Weekend” below.


Previous [VIDEO] ISIS Raises Flag Only Seconds Before Being Decimated