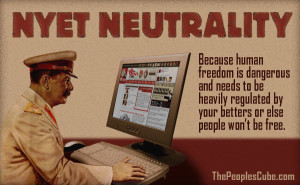 Those who have been following this page for the past several years have likely noticed how the content of the page has changed, with some people like the change and others loathing the change so much that they’ve chosen to unlike and stop following.

Over the past few weeks we’ve seen comments from people that have said we no longer share anything that’s “patriotic” and the reason for that is very, very few actually pay attention to such content and commentary anymore.

If you want proof, here’s a prime example – NET NEUTRALITY.

Before the net neutrality bill was passed, we did everything we could to rally support and get people to wake up to the fact that the government was wanting to begin regulating the internet, but the response we received from the followers of this page and others was dismal at best.

Listen folks, by now you should be able to figure out that if Obama is rallying support for it, then it can’t be good. As a matter of fact, even George Soros was pushing for it.

Remember, everything Obama does is for politikal purposes. He could give a rat’s ass about actually improving things for the average American citizen, like you and me. When the regulations of net neutrality are fully implemented, they will end up being used by the democrat party to intimidate, censor, and shut down any politikal opposition on the internet.

At the very least, we will probably end up with taxes and permit fees being imposed on websites, paying more for internet services, and having to deal with crappier service.

You don’t own a website, you say? It still effects you because the name “net neutrality” is nothing but a lie. This whole thing is meant to END net neutrality by allowing the government to regulate the internet by preventing the citizens to see certain content.

How many bad examples must people be given before they finally wake up and stop relinquishing control?

For starters, the government has bankrupted social security.

If you want another prime example of government dysfunction at its finest, you need only visit a veterans hospital where our veterans receive the most substandard level of care you can imagine, insomuch that it shouldn’t even be referred to as care.

If that’s not enough, consider the f*cking fiasco commonly referred to as ‘ObamaCare’.

HOW MANY examples are needed before people remove their head from their ass, stand up for their rights, and say NO MORE?!

ANYTHING you allow the government to take from you, no matter how insignificant, you NEVER get back!

Oh, but what about income taxes, you say?

Each year, millions across America get so excited about their income tax return because they might be due a refund. That REFUND…is money that the government STOLE from you, and you’re excited to get some of it back?!

Let me tell you something, the IRS is NO DIFFERENT than the shakedowns that the mob conducted on business owners during the 50’s, 60’s, and 70’s by forcing business owners to pay for protection. Oh, you don’t believe that?

ex·tor·tion  – ikˈstôrSH(ə)n/ – noun
the practice of obtaining something, especially money, through force or threats.

If you don’t pay your taxes the government places liens on your property and will garnish your wages. If you continue to refuse paying your taxes, the government sends armed thugs to your door and they put you in jail.

That is NO DIFFERENT than when the mob forced business owners to pay for ‘protection’, which basically meant…you pay us or we destroy your business and your life. It was extortion when armed thugs were doing it, and it’s extortion NOW when the American government is doing it. 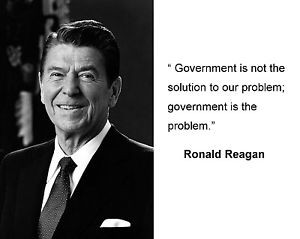 Have you ever stopped to consider the amount you are taxed each day? Why is it that even though you purchase a plot of undeveloped land, you still have to pay taxes on it? The government has no hand in maintaining the land or the development of it, yet…you owe them money? For WHAT?!

NOTHING the government ever takes from you will it ever give back to you!

The government only serves to grow itself and ensure its own survival. It does not create jobs, it KILLS jobs. As a former president said, “man is not free unless government is limited” and yet, the government is bigger now than it has ever been in history!

As Ronald Reagan said, government isn’t the solution…it’s the problem!

Net neutrality is the latest government power grab by a government that is hell-bent on destroying the second amendment however it possibly can. Unfortunately, people won’t pay attention to what’s going on until it’s too late. That has been proven over and over, each time legislation is passed that infringes on citizen’s rights without the slightest public interest or protest.

THIS is why America is on the path to destruction, because people refuse to get off their ass and out of their recliners to fight for their rights.

THIS is why the America of yesteryear will never again be experienced because people accept that this is the way things are and they won’t get involved until it all comes crashing down like a house of cards, but it will be too late.


Previous YOU HAVE TO SEE THIS! Monica Lewinsky Lurks In The Shadows Of His Presidential Portrait, Literally

Next Bodybuilder Mr. Utah Learns A Painful Lesson After Challenging A Much Smaller Man To A Fight [VIDEO]