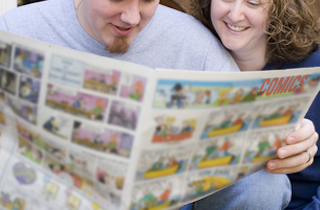 An eight-year-old in Bloomington, Indiana left a message for Herald-Times editor Bob Zaltsberg Sunday to express his emphatic dissatisfaction with the removal of several of his favorite comics from the paper’s Sunday comics page.

“OK, I want back these comics now,” the boy said, offering to “give you all my money” if “Dilbert,” “Garfield,” and others were returned.

That’s when it got dark. “You idiots,” he said. “Jerks. Shitholes.”

“I thought it was a very funny thing,” Zaltsberg told Jim Romenesko, “but still an eight-year-old calling me a shithole isn’t that pleasant.”

Alas, the Herald-Times was unable to comply with the kid’s request, as the reductions had come as the result of budget cuts, and the paper was unable to get a reduced rate from the syndicate. Shitholes.

Listen to the audio below, via Herald-Times. Obvious warning for profanity:

Next JIHADI JOHN'S FATHER: "To Hell With My Son!"