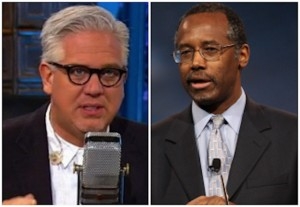 According to Glenn Beck, possible GOP candidate Dr. Ben Carson‘s comments about homosexuality being a choice is one of the dumbest things the radio host has ever heard.

After telling CNN on Wednesday that homosexuality is “absolutely” a choice, Carson cited his belief that “a lot of people who go into prison go into prison straight — and when they come out, they’re gay,” Carson said. “So, did something happen while they were in there?”

Later in the day, the retired-neurosurgeon-turned-politician told blamed the media for his remarks, suggesting to Sean Haity that he was simply taken out of context by a network seeking to make him look bad. He eventually apologized for his choice of words.

“It’s not just that he didn’t see [the question] coming,” Beck continued in the clip flagged by by Right Wing Watch. “It’s that he just thought that was a good answer. That was good enough for him. Just [imagine] I’m at a cocktail party and I’m talking to a friend and they say ‘well yeah, you know, you go to prison and you’re straight, you get out and you’re gay,’ don’t you look at your friend — I don’t care if he’s the guy who works at the 7-Eleven and he’s not running for president ever — don’t you go, ‘That’s the dumbest thing I’ve ever heard’?”

Listen to the audio below: