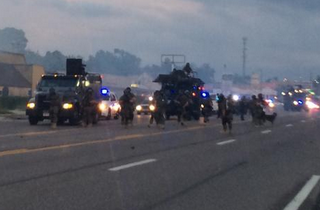 According to a Justice Department report set to be released soon, police officers in Ferguson, Mo., consistently and systematically violated the constitutional rights of the city’s residents by engaging in racially discriminatory policing. In addition, police officers reportedly made racist jokes about black people on their official email accounts.

The report is not limited, though, to the police department, and apparently extended to the city’s municipal courts as well. According to the DoJ, African-Americans were targeted for traffic tickets and fines at a disproportional rate in the majority-black city.

Perez read a series of racist jokes uncovered from officials’ emails, including one aimed at President Barack Obama.

Watch the report below, via CNN:

Previous JIHADI JOHN'S FATHER: "To Hell With My Son!"

Next [WATCH] MICHELLE RODRIGUEZ: 'Blacks and Mexicans Need to Stop Stealing All The White People's Superheros'