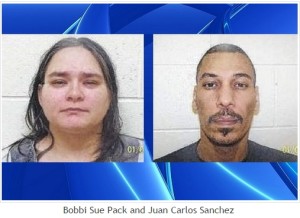 A mother and her boyfriend in Wheelersburg, Ohio, has pleaded guilty to raping her children.

The incident of abuse came to light after a brave 11-year-old girl told her teacher of the torture she and her siblings were going through at the hands of her mother and her boyfriend.

Bobbi Sue Pack, 32, pleaded guilty in Scioto County to two counts of rape and was sentenced to 10 years to life in prison as part of a plea agreement.

Juan Carlos Sanchez, 45, pleaded guilty to two counts of rape and one count of child endangering, was sentenced to 25 years to life in prison.

According to The Portsmouth Daily Times, a grandmother also is charged. The 53-year-old woman rejected plea offers and is scheduled to go on trial next week.

The case, described by Investigators as one of the worst they’ve ever seen, attracted national attention when the children were rescued in February 2014.

The couple was accused of tying the woman’s children to their beds for a week at a time. They were beaten and raped. The children were only freed to do the homework for their Ohio Virtual Academy, an online school.

The adults admitted to tying up the children as punishment for stealing food. Deputies said that they found locks on the refrigerator and kitchen cupboards in the family’s home.

The woman’s daughters were 9 and 11 years old at the time, and her son was 8 years old. The children suffered abuse for 2 years before the 11-year-old girl alerted her teacher via email, and police were called.

A 2-year-old girl, who is the boyfriend’s sole biological child, was treated fine by the family and showed no signs of abuse. She was also removed from the home by child services.