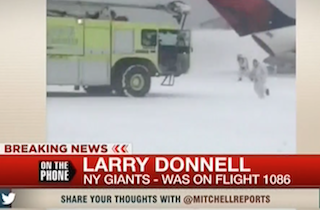 A man impersonating Larry Donnell of the New York Giants called into MSNBC on Thursday afternoon and claimed to have been on the Delta airplane that skidded off the runway in La Guardia. He was not any of those things.

“Where were you sitting on the plane and when did you first know you were all in trouble?” host Andrea Mitchell asked.

“I was sitting in the — fuck her right in the pussy,” the man blurted before hanging up.

Mitchell didn’t catch it, continuing to pose questions until she said she’d lost the connection.

“I think we were being had,” Tom Costello said. “I don’t think that was a legitimate witness, based on what he said on the air, he uttered some — some profanities.”

The “fuck her right in the pussy” gag started as a hoax almost one year ago, but has since become a meme at live television events; female journalists are understandably sick of it.

Watch the clip below, and marvel at what people do with their snow days, via MSNBC:

Previous TPN Would like to introduce our newest Contributor Susan Knowles