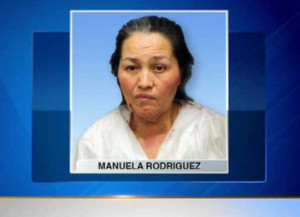 A seven-month-old girl is dead after her grandmother sliced her throat with a power saw when she wouldn’t stop crying, according to Chicago police.

Police say charges are pending against 52-year-old Manuela Rodriguez, who sources identified as the baby’s grandmother. Police said she is in custody at Mt. Sinai Hospital after she tried to kill herself.

Police found the 7-month-old girl dead in the home. She was killed by her grandmother, who was babysitting the child.

The baby girl, who was identified as Rose Herrera, died after her grandmother allegedly cut her throat with a circular saw.

“When I came out I heard a young lady in front of the door, and she was crying, ‘When am I going to see my mom?’ or something like that. And I think they told her to go inside because she was in shock,” said Virginia Otero, a neighbor.

Police said Rodriguez attempted to shove something into the baby’s mouth, possibly a cloth, to get the girl to stop crying but when that failed the woman allegedly cut her throat, killing the child instantly.

According to ABC7, Chicago police responded to the home in the 2800-block of S. Avers shortly before 10 a.m. where they spent several hours on the scene collecting evidence. Neighbors say a couple lived there with two grown daughters, each of whom had a young child.

“The daughter with the baby just graduated from college to be a teacher,” said a woman who has known the family for years. “They’re good people.”

DCFS said it has not had prior contact with the family, and neighbors say there were no problems that any of them knew of.

“I can’t, I can’t believe it. I knew them. I knew them real good. We would help out each other,” said Raul Chavez, a neighbor.

Police said both the baby and the woman were found by another relative.