On Monday three-time Grammy winner, actress, and reality star Angie Stone was arrested for domestic aggravated assault in Georgia after knocking her daughter’s teeth out, and it all stemmed from a fight over her daughter’s messy room.

The incident started when Stone entered her 30-year-old daughter Diamond’s room in her Lithonia, GA home and demanded that she clean it up as well as control her children who had been running around the house half-naked. The Dekalb Police report stated that then “Ms. Angie Stone started (getting) in her face, telling her she needed to leave because she is tired (of) her…[they] started to argue, and that’s when a physical altercation started to occur.”

According to Stone’s version of events, during the fight, Diamond punched Stone in the face and Stone picked up a metal stand to defend herself. Stone accidentally hit her daughter in the face, resulting in knocking out her front teeth. When she realized what she did, Stone tried to flee the scene but her daughter went after her to presumably hit her again. Blondy Chisolm, a family friend, had to break up the fight.

According to Diamond’s version of events she never went after Stone and couldn’t remember who struck first. After she was hit in the face, she called the police.

Both women were taken in for questioning and Diamond was released without being charged. Her mother, was not. She was charged and released on Tuesday on $10,000 bail. 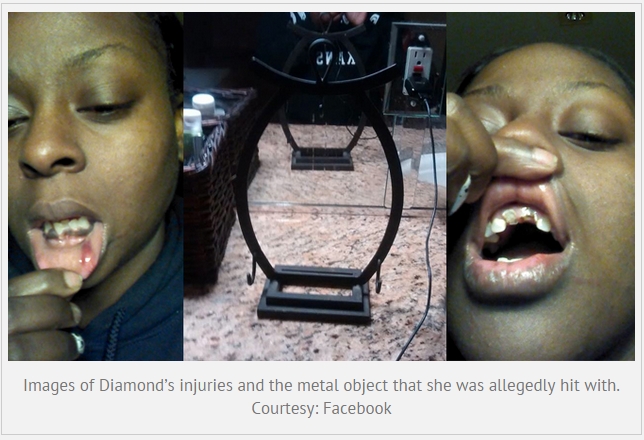 “People are so quick to pass judgment but never really know the full story. Never uphold people in wrong no matter who they are I’m crushed but I ain’t dead so for the people that praise “her” keep right on just know that it ain’t over. You so big and bad but had to use a weapon on me in a fight that you started. You giggled on the inside because you thought I was going to jail too.?#?Wrong? I’m sick of putting up these fronts and because you took shit to another level I will too. I love all my family but I cannot take anymore abuse so I’m separating myself from it all. I pray God heals us from this but from where I sit there is no turning back cause if you ain’t wit me you against me. You so worried about to media and the press but I promise you this I will not rest until my story is heard!”

This isn’t Stone’s first arrest. In 2011 she was arrested for speeding and driving with a suspended license while driving to church.