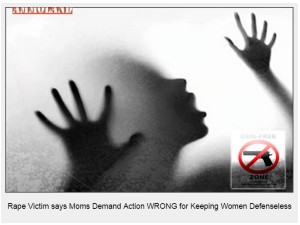 On March 12 2015, rape victim Amanda Collins responded to an op-ed by Moms Demand Action for Gun Sense in America founder Shannon Watts, which claimed that opening the door for women to carry guns for self-defense on college campuses could lead to more sexual assaults.

Collins refuted the claim and pointed out that Watts is wrong for fighting to keep women defenseless on campuses.

Just the other day, I was asked, “Why do you need a firearm on campus? What’s so threatening about becoming educated?” Here’s my answer: Eight years ago, during my junior year at the University of Nevada-Reno, I was raped in the parking garage only feet away from the campus police office.

On March 6, I reported on Collins’ horrific rape experience and her recollection of the heinous attack while testifying in favor of campus carry in Nevada. She said, “Out of the corner of my eye I could see the university police cruisers parked across the way, and in that same moment I knew that the university police offices had already closed. I knew no one was coming to help me.”

Collins had a concealed carry permit at the time of her rape, and had campus carry been legal, she would have had her gun with her and would have at least had a chance to protect herself when no one else could come to her aid.

Collins put it this way in the MSNBC column, “Had I been carrying my firearm, I would have been able to stop the attack. Not only that, but two other rapes would have been prevented and three young lives saved, including my own.”

Collins then explained what she meant by suggesting her life would have been saved:

Any survivor of rape can understand that the young woman I was [when I walked] into the parking garage that night was not the same woman who left. My life has never been the same after my attack. Legalized campus carry would have saved my family, who happens to be the collateral damage in my story, and me a great deal of untold torment.

This is what happens when women and other vulnerable people are rendered defenseless on college and university campuses by leftist, anti-gun policies. And Shannon Watts, Moms Demand Action, and Everytown for Gun Safety have dug in their heels to do their best to guarantee these policies are not changed.