The latest photos posted by ISIS show the destruction of Christian sites in Nineveh. (MEMRI) 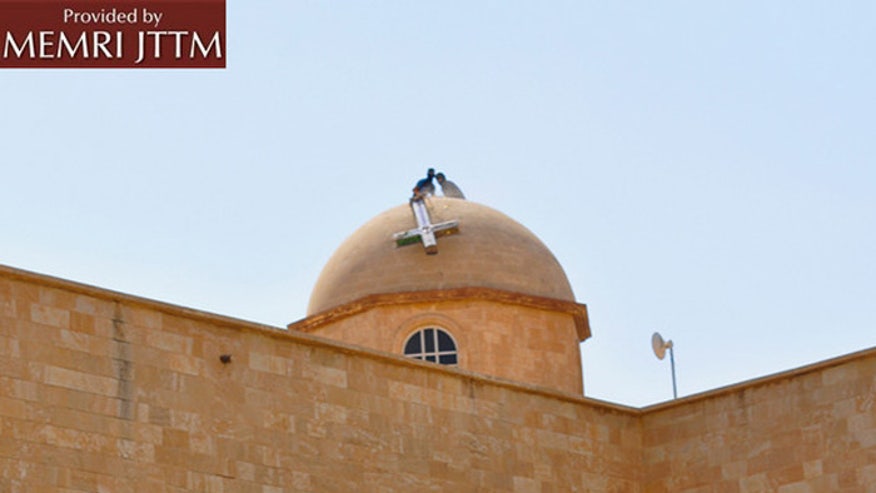 . The images show the men removing crosses from atop churches and replacing them with the black ISIS banner, destroying crosses at other locations such as atop doorways and gravestones, and destroying icons and statues inside and outside churches. The sickening images are just the latest evidence of ISIS’ ongoing effort to cleanse its so-called caliphate of its Christian heritage.

“They don’t care what it’s called; they are just following their ideology and that means getting rid of churches and minorities,” said MEMRI Executive Director Steven Stalinsky. “It is the Islamic State, and there’s no room for anyone else.

“This has been going on for some time, a systematic campaign to rid the region” of any vestiges of Christianity.

Although the United Nations has condemned the acts, Islamic State, as ISIS is also known, has enthusiastically circulated photos of its fighters destroying the sacred symbols and relics.

“We cannot remain silent,” Irina Bokova, head of the United Nations Educational, Scientific and Cultural Organization, said Friday. “The deliberate destruction of cultural heritage constitutes a war crime. I call on all political and religious leaders in the region to stand up and remind everyone that there is absolutely no political or religious justification for the destruction of humanity’s cultural heritage.” 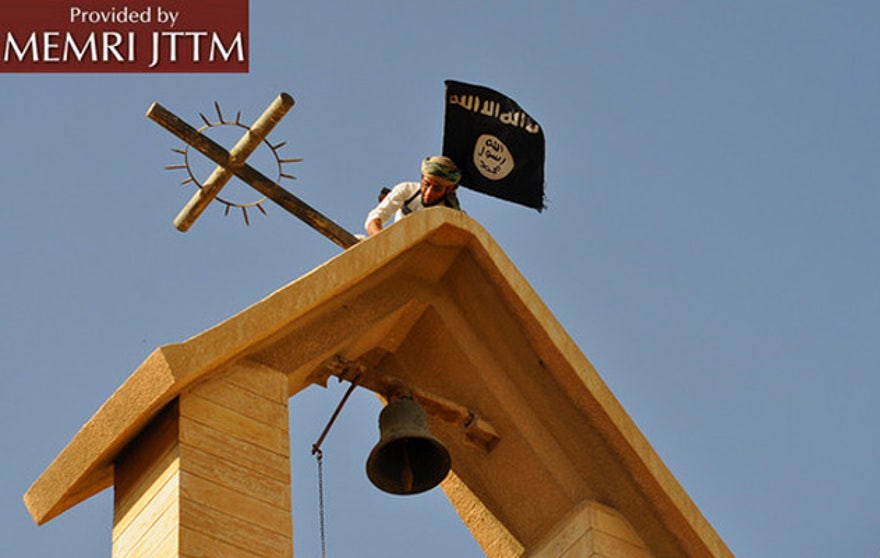 The photos show ISIS fighters knocking down crosses that have adorned churches for centuries. (MEMRI)

Bokova spoke after ISIS reportedly used heavy equipment to demolish the site of the ancient Assyrian capital of Nimrud, 18 miles south of Mosul, Iraq’s second-largest city. Statues, tablets and other relics have been taken from churches and destroyed or possibly sold on the black market. While the humanitarian crisis facing Iraq’s Christian community is of paramount concern, religious leaders also lament the loss of the religion’s most ancient artifacts.

In Iraq, Chaldean Catholic Patriarch Louis Sako last week called on the central government and the international community “to act as soon as possible for the protection of innocent civilians and to offer them the necessary assistance in lodging, food and medication.” 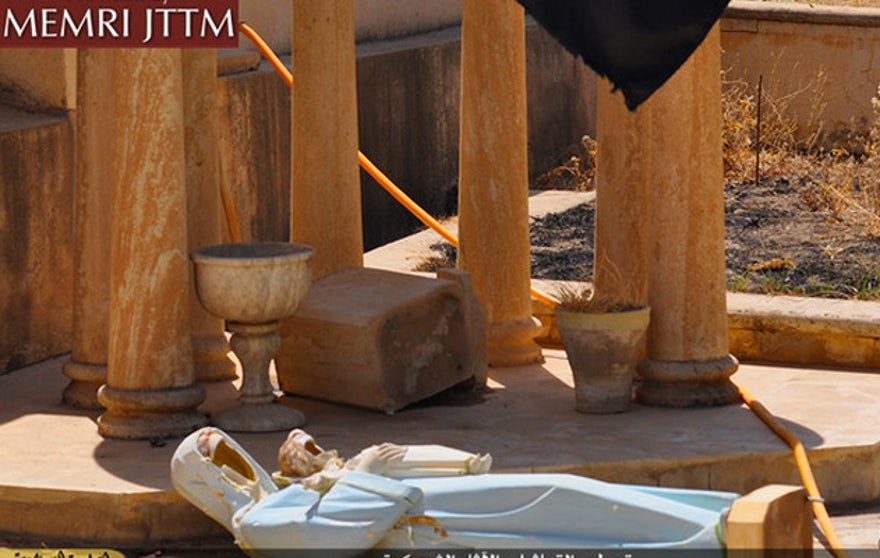 ISIS has killed Christians who have refused to convert to Islam, say refugees who have made it out of the nihilistic extremist group’s so-called caliphate. (MEMRI)

ISIS “is burning everything: human beings, stones and civilization,” he said in a March 9 statement.

Sako said thousands of families have been displaced by the fighting, and he called for an emergency meeting of Iraq’s Council of Ministers and the National Assembly deputies “to discuss this situation that threatens to deteriorate from bad to worse.”

“This is obviously a human catastrophe that cannot suffer any silence,” he said. 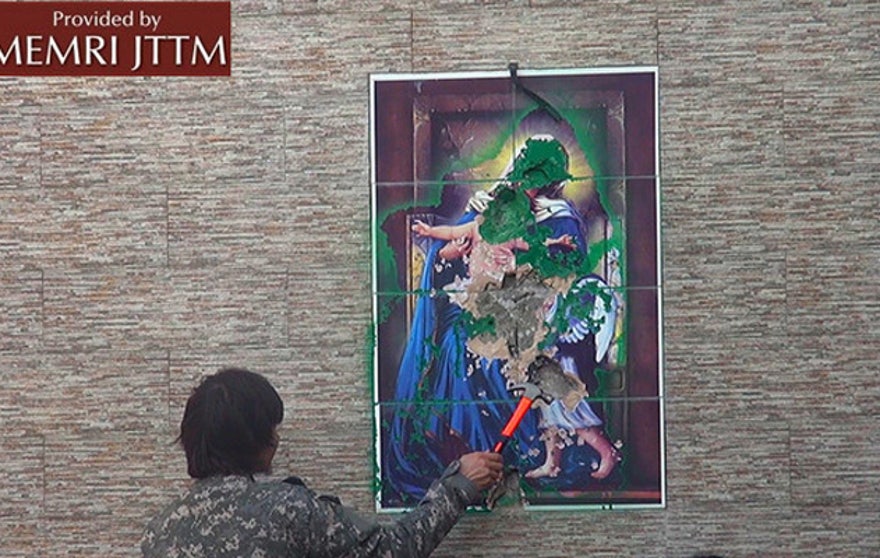 An ISIS fighter takes a claw hammer to a priceless relief at a Nineveh church. (MEMRI)

Nimrud, built more than 3,000 years ago, was the capital of the Neo-Assyrian Empire after 883 B.C. The Neo-Assyrian Empire, whose rulers spoke a language distantly related to Arabic and Hebrew, ruled Mesopotamia, the ancient name for Iraq and parts of Syria, until approximately 600 B.C. For centuries, the region along the Tigris River retained monuments, frescos, temples and a ziggurat, the stepped pyramid characteristic of Mesopotamian civilizations. 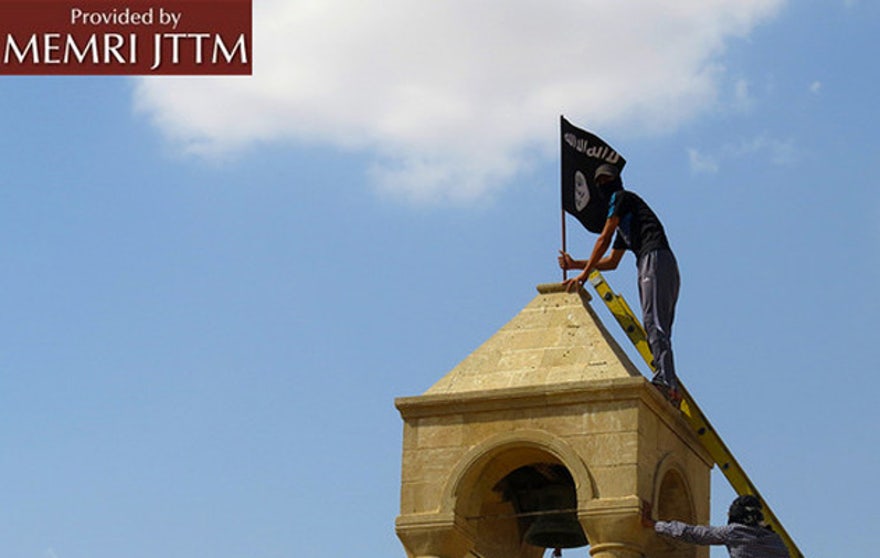 The sight of the ISIS flag replacing a cross atop a Christian church is sure to send a chill through the Christian community. (MEMRI)

But earlier this month, ISIS released video showing men smashing statues with sledgehammers in the Nineveh Museum, in Nineveh, the capital of the Neo-Assyrian Empire after 705 B.C.

In recent weeks, ISIS has also set off bombs around Mosul Central Library, destroying as many as 10,000 priceless and irreplaceable books and manuscripts.

Many relics have been taken to museums in Baghdad or around the world for safekeeping, but artifacts in churches, including murals and statues, have been left where they stood for millennia, until the rise one year ago of the black-clad terrorist army. Last summer, ISIS fighters used explosives to blow up the tomb of a key figure in Christianity, Judaism and Islam. The holy site in Mosul was believed to be the burial place of the prophet Jonah, who was swallowed by a whale in the Islamic and Judeo-Christian traditions.

Next Muslim Students Demand the Cancelation of Heroic American Movie