SALT LAKE CITY — A video of a man detaining another man at gunpoint along a busy street went viral Monday, as police explained the complicated details behind it and why nobody was arrested following the ordeal.

The video, posted to YouTube* under the username “copwatchando”, had over 100,000 views, 1,100 comments and 500 shares on liveleak.com by Monday night.

“I never would have guessed that what happened before was actually what happened,” said Salt Lake City Police Sgt. Robin Heiden. “There are three different things going on in this case. You can’t make this stuff up.”

Onlookers could be heard in the video trying to de-escalate the situation before police arrived.

“Yo, put the gun down!” one man yelled. “At this point, an accident could happen. He’s on the floor. There’s a bunch of us out here. There’s no need for you to be pointing a gun to a man’s back.”

When officers arrived on scene near the intersection of 900 West and North Temple on March 17, they didn’t seem to be concerned with the man pointing the gun, who was seen on the video lowering his weapon and walking back to a car.

Heiden said officers knew the man with the gun from past dealings as a security guard at a nearby Rite Aid. 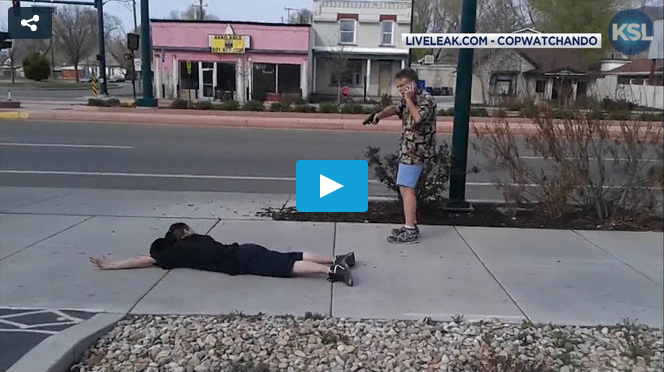 2 sides to the story

The security guard, Heiden said, was initially following a suspected shoplifter when he observed what he believed was an aggravated assault in progress.

“He saw a male with a knife kick a bicycle with another male on it, and then brandish a knife,” Heiden said. 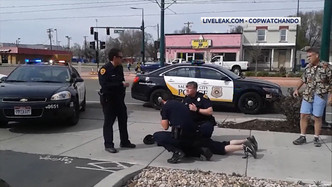 A video of a man detaining another man at gunpoint along a busy Salt Lake City street was going viral online Monday, as police explained the complicated details behind it and why nobody was arrested following the ordeal. (Photo: Courtesy Liveleak.com)

The security guard pulled a gun on the man with the knife and got him to get down on the ground. The man with a knife, Heiden said, ended up being a victim too.

“On the other side of the story, the male that had the knife — his bike was stolen,” Heiden explained. “He was looking for his bike and he found his bike.”

Heiden said that man had been confronting who he believed to be the bike’s thief when the security guard spotted them.

Heiden said nobody was arrested — outside of the suspected shoplifter the security guard was initially pursuing — and nobody wanted to press charges.

The man who had pulled the knife got his bicycle back, Heiden said. The security guard, she said, acted lawfully.

Usually somebody with a gun would be disarmed by arriving officers, Heiden said, but officers in this case knew the security guard.

Still, there are some lessons to be learned from the ordeal.

Heiden said she would not recommend most people intervening in what appears to be an aggravated assault, nor would she recommend confronting a suspected thief.

“If you find your stolen property, don’t ever try to get involved yourself,” Heiden said. “Give us a call, give us a good description where they’re at — that’s a priority call for us.”

Heiden said the bystander who took the video did the right thing in standing back and documenting the ordeal.

The case, Heiden said, is an example of why officers can’t be complacent when responding to calls involving unknown circumstances.

“You think you know what you’re seeing, when really what led up to it is completely different than what [you] thought,” she said.