Shooting police is an invitation to anarchy. That there have been protests and parades of late advocating this should be a matter of deep concern to all of us, no matter our race.

Ferguson, however, is NOT America if one looks at its population and the incredibly poor governance they have endured. You get the government for which you vote or when you neglect to vote. 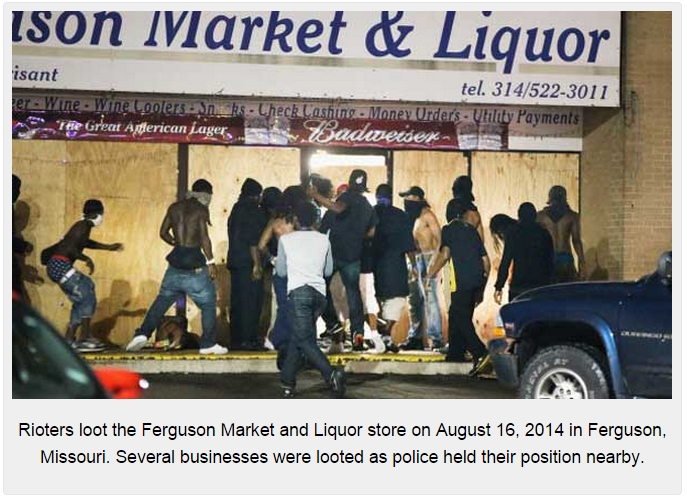 Ferguson is atypical of the nation. As James Langston notes in his book, “America in Crisis”, in Ferguson “the growth of the black population relative to whites is a recent occurrence. In 1990, blacks comprised 25 percent of the city’s population but that percentage grew to 52 percent in 2000 and 67 percent in 2010.”


“The demographic transition was not followed by a corresponding transition in black access to political positions, the police force, union representation, and the like. The recency of the demographic transition likely has altered the city in ways that do not characterize other contemporary major cities in the United States, especially those that are majority black like Detroit or Atlanta.”

As noted in the Department of Justice report of an investigation occasioned by the shooting of Michael Brown by a white police officer, local governance was a factor in the lives of its black citizens that has invoked protest and resentment.

“Ferguson,” notes Langston, “is unusual in the degree that the city uses the municipal court system and the revenue it generates as a way to raise city funds. This created a financial incentive to issue tickets and then impose excessive fees on people who did not pay.” For the record, this occurs in other comparable communities.

This, however, is not that unusual in Missouri. An article by Joseph Miller, published in the March edition of The Heartland Institute’s Budget & Tax News noted that excessive use of traffic fines is not that uncommon in Missouri. “Of the 20 cities in the county with fine collections exceeding 20% of total revenue, 13 are contiguous with one another in a 25-square-mile section” and described this as “a daily burden for local residents.”

What the media has reported regarding the number of blacks killed in police shootings is a bit deceptive. There is no question that “the disproportional number of blacks that are killed in police shootings”, says Langston. “Blacks comprise 13 percent of the U.S. population, but represent 32 percent of those killed by police between 2003 and 2009.” That’s more than double the number of whites killed.

One must, however, consider the greater number of criminal events that bring together blacks and the police responding to them.

Being black in America inherently evokes the historical fact that this nation practiced slavery prior to and since its founding in 1788 when our Constitution was ratified, to Lincoln’s Emancipation Proclamation in 1863. It wasn’t until 1964 when the Civil Rights Act was passed, followed by the Voting Rights Act in 1965 that the discrimination affecting the black community was fully addressed.

Two generations of Americans, black, white and other racial groups, have been born since then and these new generations have no living memory of the Civil Rights movement or the riots that occurred in cities like Los Angeles and Philadelphia. Between 1955 and 1977 there were more than thirty race riots in America. Younger Americans did not experience them. Older Americans recall them and the protests in Ferguson evoked disturbing memories.

As reported in a 2007 study released by the National Urban League, “African-American men are more than twice as likely to be unemployed as white males. They are nearly as likely to be incarcerated, with average jail sentences about 10 months longer than those of white men.” Between the ages of 15 and 34, the civil rights group noted that “black males are nine times more likely to be killed by firearms and nearly eight times as likely to suffer from AIDS.” The unemployment rates are comparable to those today, eight years later.

A 2007 report by the U.S. Bureau of Statistics noted that, while only 13 percent of the U.S. population, blacks “were the victims of 49 percent of all murders and 15 percent of rapes, assaults, and other nonfatal violent crimes nationwide.” Significantly, “Most of the black murder victims—93 percent—were killed by other black people” while 85 percent of white victims were slain by other white people.

One might conclude that murder is rampant in America, but the reality is that homicides are at a 50-year low. The peak homicide rate was in 1980. The rate began to grow in the mid-1960s, but steadily dropped by the 1990s. Today’s murder rate is at the lowest point in the past century.

What we are witnessing, however, is the result of cultural issues that afflict the black community. Juan Williams, a Fox News analyst, writing in 2007 noted that “One hard, unforgiving fact is that 70 percent of black children are born today to single mothers.”The school dropout rate is “about 50 percent nationwide for black students.”

“Black youth culture is boiling over with nihilism. It embraces failure and frustration, including random crime and jail time,” wrote Williams.

Ferguson is an example of far larger problems that afflict the black community. Only blacks can solve these problems.

One might have thought—and many did—that the election of America’s first black President was going to make these problems go away. Many blacks have entered the middle class, but the majority encounters the problems endemic to the black community and, until its culture and lifestyle choices change, those problems will be around for a long time to come.

With a black President, a black Attorney General, black members of Congress, black mayors and others demonstrating how different 2015 is from 1965, laying blame on white racism is no longer a valid excuse.


Previous [VIDEO] Shocking: Parents This is REALLY What Spring Break Looks Like...

Next [VIDEO] THREE-WAY GUN FIGHT: Police and Homeowner vs Burglars