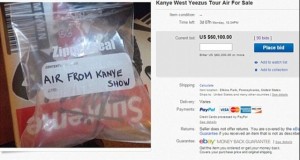 Memorabilia collectors items are known to sell for staggering amounts. However, the latest collector’s item to hit eBay has made headlines because it definitely isn’t a typical collectors item.

A man of Pennsylvania, has decided to earn some extra cash by selling bags of air he collected from a concert. A Ziploc plastic bag containing the air of a Yeezus concert by Kanye West, is being sold for $65,000 on eBay.

The unusual item appeared on the site last Sunday for just $5.00. However, the price continued to rise with more than 90 people bidding against one another.

Of course, the staggering sale of air has caught the attention of thousands via social media. 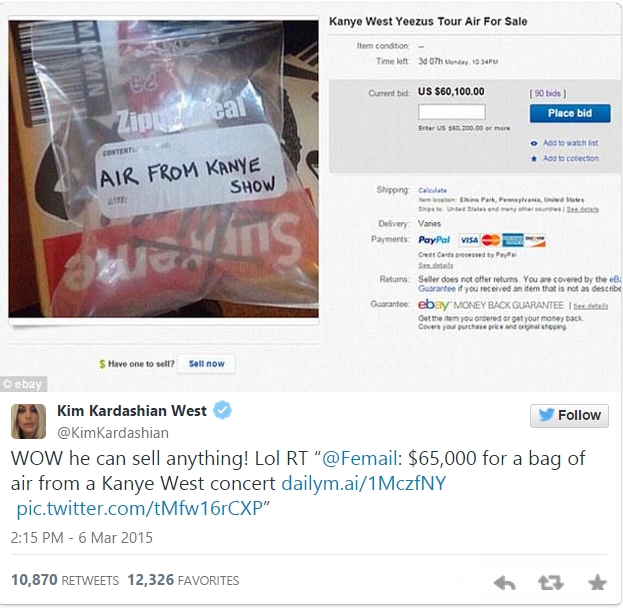 The seller wrote that the package is being shipped from Elkins Park, Pennsylvania. The seller also wrote that at the concert, he held the bag open, let in air and sealed it. The words “air from Kanye West concert” is written on the bag with a black marker.

Several copycat listings have also appeared over the past week since the staggering bid was made. A seller from Chicago, Illinois, is auctioning off a bag of air for $100. The seller is providing a photo of the concert tickets as proof of authenticity. Another eBay seller from New Jersey, is offering a bag of concert air at a Buy It Now Price of $4,000.

Needless to say, some users are outraged that anyone would spend so much money to have a bag of air while others questioned the authenticity of the air. But, surprisingly, there were some who justified the plight of a dedicated fan.

Many sellers have also listed bags of air and other collectors items from different Yeezus concerts. However, it’s probably safe to say that latest sellers won’t be lucky enough to get a $60,000 windfall for a replicated version of Kanye’s bag of air. Since the staggering sale, it will also be difficult to decipher which listings are actually authentic compared to the fake ones.

What do you think about the unconventional sale? Would you buy Kanye’s bag of air? Share your thoughts.

Bids for Bag of Air from Kanye West Concert Surpass $60,000