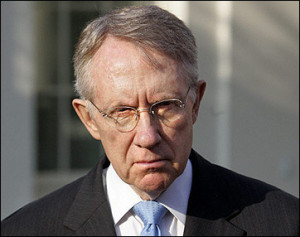 This day has been a long time coming, and it couldn’t come soon enough, but Harry Reid (D-Nv) has finally announced his retirement that will be effective at the end of his current term.

Senate Minority Leader Harry Reid announced Friday he will retire from the Senate at the end of his term.

The longtime Nevada Democrat announced the decision in a YouTube video message.

Appearing with bruises on his face from a recent at-home exercising accident, Reid said the injury has caused him and his family to have a “little down-time,” giving him time to think.

“We’ve got to be more concerned about the country, the Senate, the state of Nevada than us. And as a result of that, I’m not going to run for reelection,” the senator said in the video.

Reid added: “My friend, Senator McConnell, don’t be too elated. I’m going to be here for twenty-two months.”


Previous [VIDEO] Bag of Air From Kanye West Concert Sells For More Than $60,000

Next [WATCH] No Charges in The Baby Cut Directly From Womb Case...