Yesterday, ThreePercenterNation.com was among the first to tell you about the bold move of Indiana Governor, Mike Pence, signing into law at the Religious Freedom Restoration Act and the social media storm that ensued. Well, the corporate crybabies have jumped on the temper tantrum pile.

It seems that generations of political correcting and social engineering has been successful as we now must be labled bigots for standing up for religions and faith in God. Here’s a list of the Religious Freedom Restoration Act crybaby club as reported by ThinkProgress. 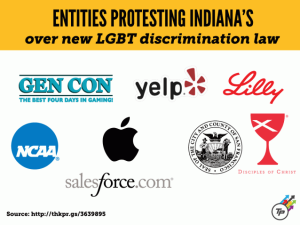 Apple’s Tim Cook had this to say:

Following the signing of the law, the crowd-sourcing review sitereleased a statement saying, “it is unconscionable to imagine that Yelp would create, maintain, or expand a significant business presence in any state that encouraged discrimination by businesses against our employees, or consumers at large.”

Yelp also threatened to boycott Arizona when it was considering passing similar legislation last year, and mentioned that it would have a similar position on Arkansas if it passes legislation that it is debating that would enable discrimination.

“Today we are canceling all programs that require our customers/employees to travel to Indiana to face discrimination,” Salesforce CEO Marc Benioff tweeted, pointing to a CNN story in which it said that it would halt all efforts to expand to the state.

Indiana also heard from the city of San Francisco as they are banning employees from business related travel to the state.


“San Francisco taxpayers will not subsidize legally-sanctioned discrimination against lesbian, gay, bisexual and transgender people by the state of Indiana,”

The NCAA may pull upcoming games scheduled there, Eli Lilly said the new law is bad for business, Gen Con threatened to pull its upcoming event from the state, and the White House and Hillary Clinton, along with a few more celebs have weighed in, as well. 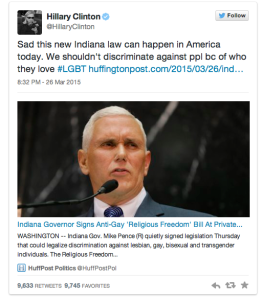 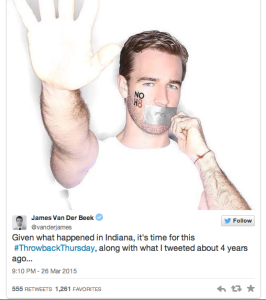 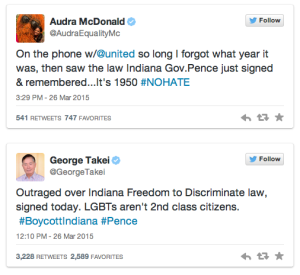 Get all the latest headlines by downloading the FREE Daily Headlines App!