I had a really weird conversation with an old friend from High School shortly after the Naval Yard facility shooting. It’s been festering in the back of my brain ever since. It went something like this.

Me: These gun free zones are dangerous. They’re encouraging exactly the sort of behavior that they claim to prevent.

Old Friend: I’m just thankful that other people didn’t have guns in there. Can you just imagine the carnage that could have resulted from a crossfire?

Old Friend: I haven’t been involved in this sort of thing, but people I know who have been in firefights have told me there’s nothing worse than being caught in a crossfire. It could have been a lot worse. Just imagine.

Me: No, there’s no way it could have been worse. There’s nothing worse than sitting there helplessly, while some psychopath walks around at his leisure and decides when and how to kill you. There is nothing worse than someone like that having absolute control over your life and you being powerless to help yourself. Do you really believe anything could be worse than helplessly sitting there waiting to be shot and killed?

To me, this difference in opinion, based on a completely imaginary scenario of some “crossfire“, was beyond stunning. Imaginary scenarios are a dangerous thing. Left to our own devices, we can imagine all sorts of incredible scenarios with no limit to imaginary disastrous consequences.

In my world view, given an absolute choice between sitting and waiting to be killed versus having the ability to fight back, even if I only had a one percent chance of success, I would like to think I would choose that one-percent chance every time.

Maybe that’s because I’ve thought about such things, I don’t know… 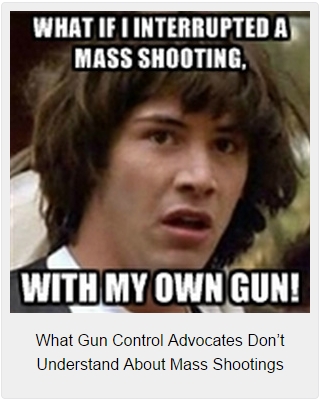 While I still can’t say I understand the origins of my friend’s point of view, I have to guess that it stems from a lack of thought about the “what ifs” in life that actually seem to happen on occasion. If you’ve never allowed your brain to consider a “what if” scenario, like, for example, what it might be like to be involved in a mass shooting, I can see how you might arrive at the “crossfire would be way worse” point of view. Maybe your brain is so set on the idea that others will protect you, that at some unconscious level, you are counting on help to arrive before your appointment with the wandering psychopath.

Without looking at actual events, or thinking about such scenarios, I can see how it might be easy to assume that mass shooting events are like the police and military gun battles we see on prime time TV shows.

You know, groups of highly trained people, who never miss, run around with infinite-capacity guns, causing devastation wherever they look. The best trained and most tactical group wins as the show breaks to commercial.

In reality, things are quite different. Virtually without exception, those who commit these heinous mass murders are cowards who seek absolute control of a situation. They seek targets where they can exercise complete control, without interruption, for their 10 minutes of infamous activity. Their temporary reign of terror always quickly ends when they are confronted with force.

The Incalculable Value of Interruption

While my friend’s conversational points focused on the danger of a crossfire, in a sense, that’s exactly what we want to happen when someone is intent on committing mass murder. Think about it. In every terrible example of a mass killing event, the perpetrator had not only desire, but time and absolute control over the immediate environment. They owned a period of time, maybe only 10 minutes, where they could do whatever evil thing they wanted to do, completely unopposed. While 10 minutes sounds short on paper, it’s an eternity for the victims involved. Try sitting still and doing nothing but watching the seconds go by on your watch for 10 straight minutes. Oh, and imagine someone is in your house trying to kill you while you watch the seconds tick.

But what happens when some person or event interrupts the murderers plan? Good things, as it turns out.

A perfect example is the “non-mass shooting” at Clackamas Mall in Oregon. Never heard of it? That’s exactly my point, because, due to simple interruption of a psychopaths plan, it never became a mass shooting.

Just three days prior to the tragic mass murder at Sandy Hook, a psychopath named JTR (I won’t promote his name here) stole a rifle, loaded up with ammo and entered the Portland area mall intent on shooting random people. He went in with somewhere north of 150 rounds of ammo and began shooting strangers. After hitting three, he was confronted by a legally armed concealed carrier, Nick Meli. Thankfully, Mr. Meli ignored the “No Guns Allowed” signs at Clackamas and he was able to confront the gunman. Seeing his plan interrupted, the gunman ran to a stairwell and promptly killed himself.

Interrupted is the key word here. With no opposition, the gunman had his pick of between 8 and 10 THOUSAND shoppers in the mall at the time of the shooting. Tragically, he managed to kill two and wound a third before being confronted by Mr. Meli. Not in any way, shape or form to diminish Mr. Meli’s courage or skill, but he did not need to engage in a running ninja fight with the gunman. In fact, Mr. Meli never fired his gun, due, by his description, to an innocent bystander behind the gunman.

Mr. Meli interrupted the gunman’s plan, and that was enough to save dozens of innocent lives. This is the point that gun control advocates fail to grasp. Even temporary interruption of a killer’s plan can be enough to completely change the outcome. Once again, there is no scenario worse than allowing them to continue with their evil plan according to their planned timeline.

The value of interruption is not fancy combat science. It’s a basic concept taught in sports, self-defense, law enforcement and the military. If you want to get scientific about it, look up USAF Colonel John Boyd’s work on the OODA loop. It all boils down to acting, so the opponent is moved to a position of reacting to your act, rather than carrying out their original plan. Many times, that’s all it takes to make a dramatic difference in the outcome.

Consider some of the most heinous mass murder events and the amount of uninterrupted time the killers had to perform their acts:

What might the outcome have looked like in each of those situations if the murdered had faced a simple interruption within the first minute?


Previous VIDEO: Hurry! Watch Before It's TAKEN DOWN! SNL-The ROCKOBAMA

Next Another Suicide In MO State Auditor Suicide Story