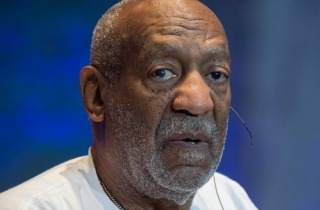 Bill Cosby has been getting the occasional heckler during his Far From Finished standup tour, and it happened again a few days ago, when someone shouted about Cosby’s many, many allegations of rape and sexual misconduct.

The man, identified as Michael Crook, interrupted Cosby’s stand-up and shouted, “38 women spoke up and called you a rapist!”

Members of the audience started booing and shouting at him to sit down. One woman spoke up and said, “How many women called you something?”

Cosby told the audience to stay calm and not further disrupt the proceedings, and said he was going to go back to telling jokes. Crook then shouted, “Tell the one about how to get away with rape!”

He was escorted out by security, and afterwards Crook explained why he did what he did:

“I stood up to Bill Cosby tonight because I believe the 38 women who have come forward so far to accuse him of raping them. I can’t speak for those women, but I am determined to stand up with them and tell Mr. Cosby that he cannot simply avoid answering for those crimes.”