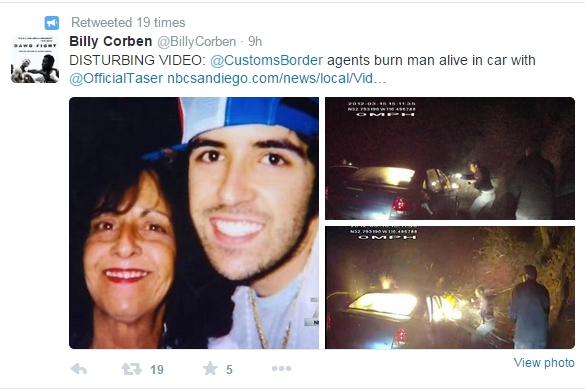 The FBI has released a graphic video that shows a blue Ford Focus rental car erupting into a ball of flames after a US Border Patrol agent broke the car’s passenger side window and shot a Taser into the cab, igniting gas fumes inside. Inside the vehicle engulfed in flames is 25-year-old Alex Martin.

Martin’s family said that had been driving for 22 hours on his way back from Texas, when he got lost in California. When officer attempted to stop him with unmarked cars, he must have been very scared.

Agents first made contact with Martin around midnight. Agent Alex Fishman claims Martin was seen driving the wrong way on Interstate 8, but he wasn’t pulled over until he was stopped at a cul de sac. (Iredale disputes this claim, saying it is unclear Martin and the wrong-way driver are the same person.) Martin may have been trying to work out where he was – a neighbor said Martin had asked for directions, Iredale said.

Agents approached Martin in an unmarked car, in plain clothes and with lights on. Martin fled, driving for about three minutes at speeds up to 75mph, his attorney said. Customs agents deployed spike strips as Martin drove through a checkpoint on Old Highway 80, deflating the Focus tires, and stopping the car a little more than a quarter-mile down the road.

The blast was so strong that it blew the agents backwards and rather than help Martin escape the inferno, dashcam footage showed the agents fleeing the scene and leaving Martin to burn to death.


“You’ll see in this video they just walk away, and consult with each other.”

The names of the officers were not released.

Gabriel Pacheco, a lead Border Patrol union representative, blames the victim for his own death. He said that Martin’s death could have been avoided if he had just pulled over.

There is no audio track to the video, but Martin’s family attorney said plain-clothes agents then gave conflicting directions – including “hands up!” “Get out of the car!” and “Roll down the window!”

“He couldn’t comply with any one command without violating or contradicting the other three,” Iredale said.

Pacheco said that the proper protocols were followed in the chase in stopping Martin’s vehicle and that the fire posed a high risk to the agents.