Whether it is another transpicuous display of erebusic diversity (and it is), or another blatant attempt to transmogrify the United States into accepting the incursion of Islam as a valued tradition of America (and it is), all reasonable minded Americans should be outraged.

The Pledge of Allegiance to the American flag isn’t a case of “should be” always said in English, it is a case of “it must always be” pledged in English. There is no acceptable reason for it to be otherwise. English is the official language of the United States and it is the language of those whose blood was shed – from which the Pledge was born. 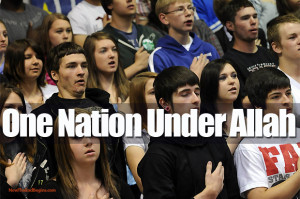 But in Pine Bush, New York a public school claimed it was an accident and a misunderstanding that allowed for the Pledge of Allegiance to be recited in Arabic.

During national Foreign Language Week, the Pledge of Allegiance to the United States, which was usually recited by senior class president, Andrew Zink, was turned over to an Arabic-speaking student. “The idea was to promote the fact that those who speak a language other than English still pledge to salute this great country” the district said in its statement.

The problem with that reasoning should have been apparent from the outset. If foreign speaking students claim to “pledge to salute [our] great country,” then it is more than reasonable to expect them to honor America by doing so in our American language.

However, and not surprisingly, the Council on American-Islamic Relations (C.A.I.R.) viewed it differently. Taking the lead their New York chapter challenged the school’s justification for apologizing to the American students and their families who found the Pledge being performed in Arabic disrespectful – not least of all because some of the students and families had lost family members and friends in Afghanistan. The school assured all that “the Pledge [of Allegiance to the United States of America] would be read in English from now on.”

C.A.I.R. spokeswoman Sadyia Khalique said: “When a simple student activity designed to promote mutual understanding receives such a negative reaction and the school in which it takes place is forced to issue a public apology, all Americans who value our nation’s history of religious and ethnic diversity should be concerned.”

What Khalique conveniently ignored is that it is precisely because of the welcome mat that has been extended to those from other lands and of different religions, owe it to America to uphold our sacred traditions – not least of which is Pledging our Flag in English.

Islam played no part in America’s history apart from ensuring that there was a robust supply of slaves.

I emphatically state that Muslims are not welcome to come here and form their own idea of government and establish their own definitions of what is acceptable based on their so-called religious beliefs.

All are welcome here and with that thought in mind, our ancestors intended for all who came to these shores to assimilate into our culture, not come here and form their own independent cultures.

The depth of arrogance embodied in Khalique’s statement is shocking. Those settling in Arabic countries are expected to assimilate into their Islamic culture and there are harsh penalties for not doing same.

Muslims come here and make demands that would never be allowed for foreigners going to their countries. 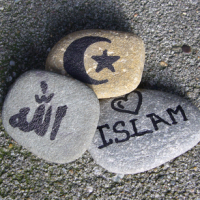 We should be outraged by her indictment of America. Especially when Christians around the world are being brutally slaughtered by Muslims and the Muslims living here are silent as stones.

She further overlooked the fact that Muslims are not speaking out against those of her so-called religion condemning their acts of terror or that the planning for some of these attacks takes place in their mosques.

Reciting the Pledge of Allegiance to America in Arabic isn’t “a simple student activity to promote mutual understanding,” it is an act of reverence to those who gave their lives to make America free. It is a Pledge of loyalty born out of the debt that was paid in blood for America to become the greatest nation in the world.

Next Every 2016 GOP Presidential Hopeful Owns Guns BUT Bush & Christie