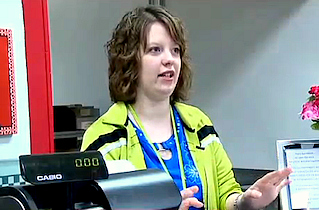 On the off chance a gay couple in Walkerton, IN wanted pizza for their wedding, they’ll have to go somewhere besides the family-owned Memories Pizza, which told a local news team Tuesday night that they would refuse service to a same-sex wedding.

“If a gay couple came in and wanted us to provide pizzas for their wedding, we would have to say no,” owner Crystal O’Connor told ABC 57. “We are a Christian establishment.”

She had been asked about the Religious Freedom Restoration Act signed by Governor Mike Pence(R) last week, which critics say would legitimize discrimination of the exact sort O’Connor described.

The family emphasized that they would not refuse service to gay couples who came into the pizzeria to eat, but would not cater same-sex weddings. “We’re not discriminating against anyone,” O’Connor said, “that’s just our belief, and anyone has the right to believe in anything.”

Her father added that the homosexual lifestyle was a “choice,” as he chose to be heterosexual. “Why should I be beat over the head to go along with something they choose?” he asked.

UPDATE 10:19: Memories Pizza now has a one-star Yelp rating, along with pics of dudes in speedos. The internet works fast.

Next [WATCH] Here's The Newest, Awful Way to Get Kicked Out of A Fraternity