LONG BEACH, Calif. (AP) – What’s it going to take to get people to use a lot less water in drought-stricken California, the Technicolor landscape of lush yards, emerald golf courses and aquamarine swimming pools?

The state may be about to find out as it imposes the first mandatory water-use restrictions in California history later this year.

Gov. Jerry Brown on Wednesday ordered a 25 percent overall cutback in water use by cities and towns, but not farms, in the most sweeping drought measures ever undertaken by the nation’s most populous state.

The crackdown comes as California moves toward its fourth summer of drought with no relief in sight. Record low snowfall over the winter has left the state of nearly 40 million people with a year’s worth of water in its reservoirs, and dwindling groundwater for wells.

On Thursday, retired secretary Brenda Johnson stood in the doorway of her Sacramento home contemplating her lovingly tended lawn and azalea bushes. Johnson did not love the idea of brown as the new green.

“With the money I put into it, I don’t want it to go dry,” said Johnson, who got a warning letter from the city last year for watering her front yard on the wrong day.

In Southern California’s sunbathed city of Long Beach, howeowner Katherine Rusconi stood among the bright red, pink and yellow succulents and desert plants that make up her front yard, basking in the knowledge of being ahead of the game.

The city of Long Beach gave her $3,000 in rebates for ripping out her own loan less than two years ago. Some of her neighbors have since followed her lead, making the block a showpiece of water-saving, wildlife-friendly yards.

“You know, this is a desert climate. This should have been in place for some time,” Rusconi said. 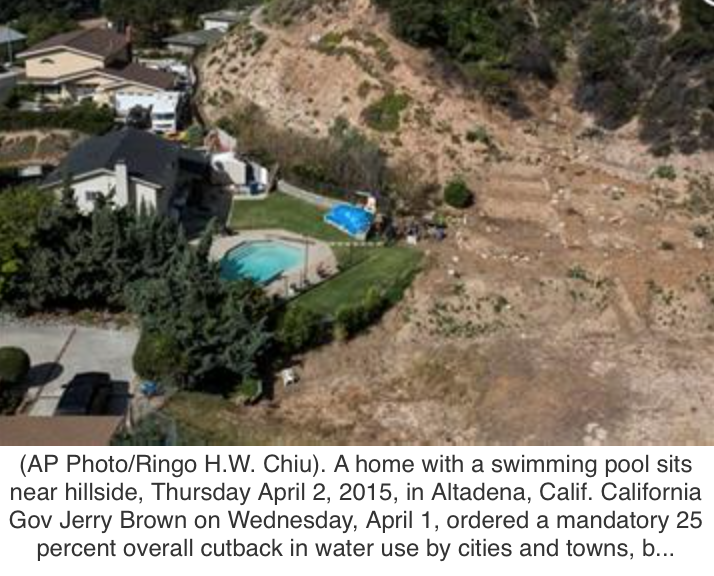 Brown’s move to get tough on water use came after his push for voluntary conservation yielded mixed results. Asked by Brown in January 2014 to cut their water consumption by 20 percent, Californians achieved only about half that.

Affluent Southern California communities with lots of landscaping on automatic timers were some of the worst offenders, topping 300 gallons of water per person a day compared with 70 gallons for some San Francisco Bay Area communities.

State water officials will now draw up the emergency regulations to carry out the governor’s order and hope to have them ready for enactment in May, said George Kostyrko, spokesman for the state Water Resources Control Board.

The governor’s order requires the roughly 400 water agencies around the state to cut water use by one-quarter from the 2013 level.

Homeowners will get rebates for replacing lawns with greenery more suited to the semi-arid state and for installing more water-thrifty appliances and plumbing fixtures. The state also will press water agencies to impose higher, graduated rates to discourage water guzzling.

Next [WATCH] Near Fatal Shotgun Mistake Captured On Video