The top-seeded University of Kentucky suffered a crushing loss to Wisconsin during Sunday evening’s Final Four matchup, and one player reacted not-so-classily during a press conference.

When a USA Today reporter asked Kentucky center Karl-Anthony Towns about his attempts to guard Wisconsin’s Frank Kaminsky — recently named the Associated Press’ “Player of the Year” — another Wildcat player thought he could mutter a response and not have anyone hear him.

Kentucky point guard Andrew Harrison covered his mouth as he mumbled “Fuck that nigga” under his breath, but it was audible enough to be caught on the hot mic and on national television.

On Sunday, April 5th, Harrison issued an apology via Twitter. 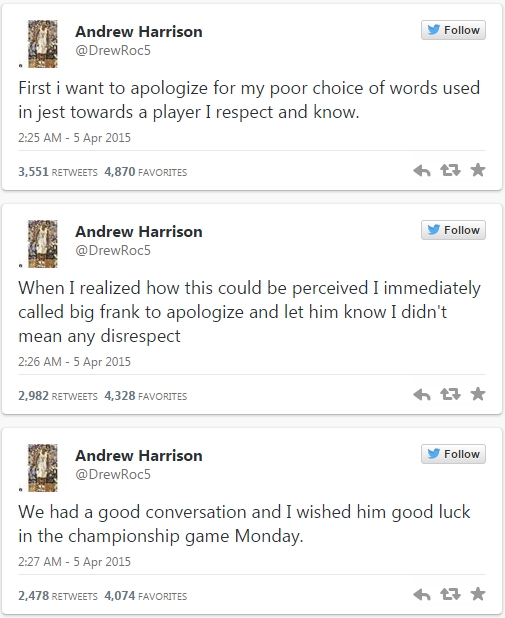 1. Donald Sterling used the “N-word” in his own home,  resulting in losing his Basketball Team.

2. Oklahoma University SEA Frat sings song using the “N-word” on a bus, resulting in the Frat being closed down and 2 students expelled.

3. Joey Casselberry college baseball player at Bloomsburg University calls Mo’ne Davis a racial slur, resulting in him being kicked off the team.

4. University of South Carolina girl writes the “N-word” word on a white board – expelled from School.
What will Kentucky do with a player representing their school in uniform at a press conference calls another player the “N-word”?

Will Kentucky man up? It isn’t likely. What will the NCAA do? Guaranteed, not a damn thing.

Next Who is Alix Bryan, and Why You Should Care.... (Your college students education may depend on you knowing)