Kentucky Sen. Rand Paul is expected to launch his 2016 presidential campaign at high noon on Tuesday, bringing his libertarian-leaning brand of conservatism to what is likely to be a crowded primary field. 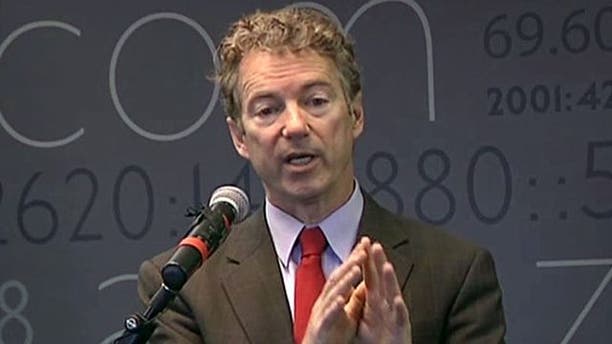 The 52-year-old Republican senator will announce his plans at a “Stand with Rand” rally in Louisville.

A Tea Party favorite and frequent antagonist of leaders of his Republican Party, Paul is expected to head out after the rally to early nominating states with a pitch aimed at the libertarian corners of the GOP. He would be the second announced candidate, following closely behind Sen. Ted Cruz of Texas, but he could face as many as 20 rivals for the nomination before the lead-off Iowa caucuses early next year.

After his speech in Louisville, Paul was also set to answer questions from voters on his Facebook page.


On the eve of his launch, Paul’s political committee put out a web video that said: “On April 7, one leader will stand up to defeat the Washington machine and unleash the American dream.”

Paul joined the Senate in 2011 after the Tea Party wave that also helped Republicans take control of the House for the first time in roughly 40 years.

While at times a gadfly to party leadership, he’s also positioned himself as slightly more mainstream than his father, former Texas GOP Rep. Ron Paul. While his father proudly embraces anti-interventionist views, the younger Paul has denied claims that he’s an isolationist on the world stage.

At a time of Islamic State and other terror threats, Paul may have to fight to prove his national security credentials — particularly as other Republicans suggest he’s not tough enough.

On Monday, Sen. Lindsey Graham, R-S.C., who’s weighing a bid of his own, said, “Rand Paul’s foreign policy is to the left of President Obama.”

Paul nevertheless has risen to national prominence, in large part because of his outspoken opposition to government surveillance and overspending, including the high cost of imprisoning Americans under mandatory-minimum drug sentencing.

He attended Duke University School of Medicine and originally worked as an eye doctor. Paul is married to Kelley Ashby and they have three boys — Robert, William and Duncan.

Beyond seeking support from conservatives, independents and libertarians, Paul also plans to get the backing of those who might not necessarily think a Republican deserves their vote.

Paul has made a point of visiting college campuses, including historically black colleges, and minority communities. For example, after the protests in Ferguson, Mo., he visited the city and urged black residents to vote.

Perhaps reflecting the challenges he faces in convincing his critics he deserves the nomination, Paul is also leaving open the door to a second term in the Senate. With the backing of his state’s senior senator, Majority Leader Mitch McConnell, Paul is likely to seek the White House and the Senate seat at the same time.

One of his likely presidential rivals, Sen. Marco Rubio of Florida, has said he would not double-dip on the ballot. He is expected to announce next week that he will skip a Senate re-election bid in 2016 in favor of putting everything into a presidential campaign.


Previous Teen Dies After Believing He Can Fly While Evading Arrest

Next Text From Babysitter To Boyfriend: "But No One Could Hear Her If We Were In My Car"