If you want to know what a corrupt police state of revenue collecting, citation addicted bureaucrats look like, you needn’t look any further than the state of Missouri.

A recent report showed that there were 23,457 arrest warrants pending in Pine Lawn Municipal Court in St. Louis County. That’s about 7.3 per resident. However, Pine Lawn is far from the worst. The town of Country Club Hills has over 35,000 outstanding arrest warrants, or a mind blowing 26.9 per resident. 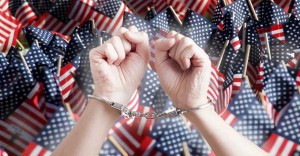 The vast majority of these warrants are for what St. Louis residents have come to call “poverty violations.” Poverty violations are “crimes” that have no victim and are designed to generate revenue for the state. They are things like driving with a suspended license, expired plates, expired registration and a failure to provide proof of insurance.

A $200 ticket for an expired registration could mean that you either feed your children for two weeks or spend a week in jail. Many folks find themselves on the lower end of the socioeconomic scale and are unable to contribute to the state’s revenue collection scheme; they are subsequently classified as criminals.

There are so many ridiculous ways for the state to collect money that even police officers are unable to keep up with them all. But that doesn’t stop the cops from enforcing them.

One such arbitrary law designed for revenue collection is issuing citations for vehicle registration information that is incorrect.

Meet officer Jerry Dowel, a Country Club Hills police officer who is still on the streets, patrolling the same neighborhood where he’s accused of threatening to harm his landlord.

Last month, a judge issued a full protection order against Dowell after he was accused of threatening and harassing his former landlord, Michael Blair.

Not only is Dowell violating the protection order by showing up with his gun and within the 25 foot radius, but he’s also breaking Country Club Hills arbitrary revenue collection law about vehicle registration.

According to KMOV News 4, at Dowell’s new home, located right next to the one he rented from Blair, there’s a vehicle with Illinois plates registered to Dowell. According to Illinois state records, Dowell claimed to live in Cahokia, but the landlord doesn’t remember renting to Dowell, and the woman who lives there has called the Cahokia house her home for the last six years.

According to the code, Dowell is in violation of the law.

In 2013, the police chief issued a memo calling attention to officers who did not have their personal vehicles properly registered and licensed. He told his officer they are not exempt or above the law, and that it’s highly unethical for them to write tickets for such violations when they themselves are in violation of the same laws.

However, unethical, is a word that seems to be removed from the vocabulary many law enforcement outfits across the country.

Country Club Hills’ police chief and mayor declined to comment in detail about Dowell. When KMOV asked the mayor about this incident, his response was, “I’don’t know nothing.”

He did say that he would comment on the case, but this would have to take place tomorrow — after the elections.
Source: The Free Thought Project

Next BREAKING: Jury reaches a verdict in Boston bombing trial WATCH IT LIVE