Political Correctness and social engineering are alive and well on college campuses and equally so at the University of Michigan. Muslim student protesters call Chris Kyle a mass killer and say American Sniper is racist. These protests prompted the university to cancel its screening, on campus. 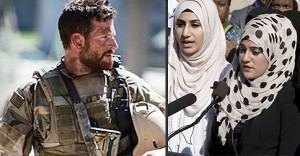 “Anti-Muslim and anti-MENA hate crimes are growing increasingly common. These incidents create an unsafe space that does not allow for positive dialogue and triggers U of M students.

Examples like the recent Chapel Hill shooting, which took the lives of three Arab American Muslim students, Deah Barakat, Yusor Abu-Salha, and Razan Abu-Salha, contribute to this lack of safety and space for Muslim and/or MENA students.

The movie American Sniper not only tolerates but promotes anti-Muslim and anti-MENA rhetoric and sympathizes with a mass killer. Chris Kyle was a racist who took a disturbing stance on murdering Iraqi civilians. Middle Eastern characters in the film are not lent an ounce of humanity and watching this movie is provocative and unsafe to MENA and Muslim students who are too often reminded of how little the media and world values their lives. What we instead should offer is compassion and respect towards others.

“In place of “American Sniper,” the vaunted University of Michigan will show “Paddington,” a kids movie about an animated bear. Yes, seriously…”

Get all the latest and breaking news with the DAILY HEADLINES APP! Download it for FREE now!

Next Democrats: Get A $2,000 Tax Credit For Turning In Your Assault Rifles