In January, 18-year-old Courtney Griffith was pulled over for the light on her license plate being out. Concerned by the officer’s aggressive behavior and knowing her rights, she propped her cell phone up on the dashboard to capture the incident.

After brutalizing her 17-year-old friend and taking them both into custody, the officers attempted to delete the footage. Luckily, the video went to a “recently deleted” file on her iPhone and was able to be recovered. 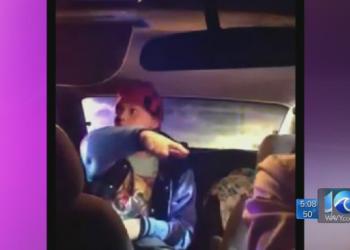 The young mother had just pulled into her driveway with the father of her child as well as her 17-year-old friend Brandon. As they turned in, police officers who were following her turned on their lights and pulled her over, citing the light above her license plate. One of the officers who pulled her over, Officer Pittman, was the same officer who had previously arrested her as a minor for possession of marijuana, something she maintains she no longer touches. Griffith believes that he had remembered her from their previous encounter.

The officers proceeded to tell the teenagers that the vehicle smelled like marijuana and demand that the passengers step out of the vehicle. At this point, there were four cop cars on the scene over a broken license plate light and the alleged smell of marijuana. Brandon, being a minor, repeatedly requested that his parents be present.

Griffith asks if she is being detained and the officers reply that she is. At this point, an officer moves the front passenger seat forward and instructs the teens to keep their hands visible at all times, after asking another officer to “go cover the driver.”

The teenagers are asked to step out of the vehicle. Brandon continues to request his parents be present while Griffith is heard calling the officer out on being the same cop that had previously pulled her over. Things begin to escalate, and the sensible young woman requests a sergeant be present to avoid her rights being further infringed.

An officer is heard grunting an order at Brandon and his eyes widen as he asks Griffith to make sure she is recording. As he is speaking, he is shot in the eyes with pepper spray.

“I’m seventeen years old, stop!” he cries out as the pepper spray burns his eyes. He states that he is calling his mother and repeats that he is only a minor as the officers threaten to tase him.

Moments later he is hit with another round of pepper spray and tased. As he cries out in pain, the officers continue to grunt at him to get out of the vehicle.

“Get out, or you’re going to get it again!” the officer states.

“Alright,” Brandon complies. As he begins to step out of the vehicle, he’s shot with another volt of electricity from the officer’s taser, seemingly for no reason at all.

The officers begin beating him and screaming at him, continuing to escalate the situation and making things as hectic as possible. Brandon was ultimately tased four times. Eight cops were on the scene, with at least five of them involved in the assault on the unarmed teen.

At the end of the video, you can see an officer looking around the vehicle with a flashlight and then shutting off the camera. Griffith told The Free Thought Project that this was the Sargent she had requested to come to the scene. She believes he is the one who attempted to delete the footage.

“They arrested me, never Mirandized me or Brandon, and they sent me off with a summons. When I went back to my car, my phone had been brought off the dashboard and was on the drivers seat. I asked the cops who deleted the video, after looking for it in my folder, and they all started laughing. It was sickening. I later found it in my recently deleted folder,” Griffith told The Free Thought Project.

Brandon is currently imprisoned until July on charges of assault and battery on a police officer and resisting arrest.

Please share this story widely and message the Virginia Beach Police to demand they conduct an investigation into these officer’s actions.