A 37-year-old man has been arrested in Quebec after a family in a car was threatened with a chainsaw, in an incident captured on video by a “terrorized” mother of two.

The man was arrested Monday morning by police in Saint-Jérôme, after a video of the alleged incident Sunday around 7 p.m. ET went viral on social media.

The car’s passenger, Karine Cyr, recorded the confrontation with her cellphone, and posted it on her Facebook page. It shows a man approaching the vehicle, swearing and revving a chainsaw.

Children inside the car can be heard crying. 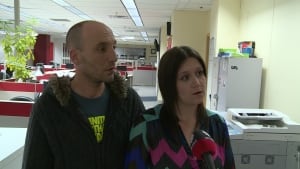 Alexandre Hermenier and Karine Cyr, a couple vacationing in Quebec with their children, say they regret following a driver who apparently cut them off on the road, and then wielded a chainsaw at them. Cyr captured the alleged incident on her cellphone camera, and posted it on social media. (CBC)

“In the heat of the moment, I kept filming…. As a mother, I got very angry. I said, ‘Before threatening my children, come and see me,'” Cyr told CBC Montreal.

The man ultimately left and went back to his vehicle.

“I think the man noticed that, first of all, I caught it all on video, and he could see on my face that I was terrorized and he saw me call the police.”

Cyr said she and her family, who live in L’Épiphanie, Que., were on vacation. She was in the car with her husband, Alexandre Hermenier, who was driving, and their two children were in the back seat.

Cyr said the driver cut them off and was driving erratically, so her husband followed the vehicle to get the licence plate number and tell police where the man was going. They ended up on a dead-end road and Hermenier parked his car, blocking the other vehicle from leaving. Cyr said that’s when the driver got out of his car and threatened them with a chainsaw.

“It was a terrifying situation,” Hermenier said.

The video has been online for less than a day, and by Monday evening had more than 600,000 hits.

Cyr said that, in hindsight, she would have handled the situation differently.

“Everyone will react differently, but I would like to say that if you see dangerous driving, do not follow the driver — the mistake that we made with two children in the back seat. We regret it tremendously. If it happens to you, pull over and just call police.”

“He will face charges of assault with a weapon for starters … and he could face more charges,” said spokesman Robin Pouliot.

The man is expected to appear at the Saint-Jérôme courthouse Tuesday morning.

In the video, the woman’s children can be heard screaming as they were petrified from the chainsaw wielding man.

Police were called, and after reviewing the video, the man was arrested. He faces charges of assault. The 37-year-old suspect has no previous criminal record.


Previous 5 Important Facts About the ISIS Inspired Man That Plotted to Blow Up Ft. Riley

Next These First Responders Were Caught On The Job...