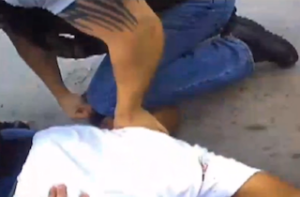 Tulsa police said an officer made a “mistake” when he fatally shot an unarmed suspect with his gun instead of his taster. The man died an hour after the shooting.

Video was released Friday showing the incident, in which several officers chased down suspect Eric Harris, who ran after he tried to sell a gun to undercover cops. When the suspect was pinned down, the 73-year-old reserve deputy Robert Bates said he meant to reach for his taser, but accidentally pulled his gun instead. “I shot him, I’m sorry,” Bates is heard to say on the video.

“Fuck your breath,” an officer is heard yelling on the video.

Tulsa police maintain that Harris, who had a previous arrest for assaulting a police officer, had been a threat, and called his shooting an accident. “He made an inadvertent mistake,” said Sheriff’s Captain Billy McKelvey of Bates’ action. As of this writing, no investigation is underway.