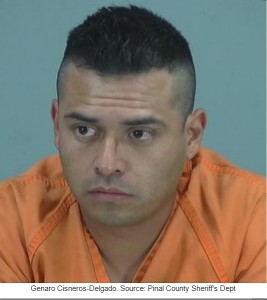 Who remembers the words of Deputy Secretary of Homeland Security Alejandro Mayorkas when he said in September 2014, the U.S. border is “more secure than it has ever been before”?

If that were the case, illegal aliens wouldn’t be crossing our southern border at a staggering rate, and this scumbag wouldn’t be creating chaos for law enforcement.

What started off as a simple traffic stop leads to a dramatic and dangerous high speed chase and it was all caught on camera. The video released today shows the Friday night pursuit that took place on Interstate 10 between Tucson and Phoenix involving deputies with the Pinal County Sheriff’s Department.

The man behind the wheel, 26 year-old Genaro Cisneros-Delgado, is no stranger to law enforcement. Records show he’s been deported 20 times for entering the U.S. illegally.

Cisneros-Delgado has been booked for felony flight and endangerment with more charges are pending. He’s being held on a $50,000 bond. Authorities say the men in the van with him were also illegal immigrants and that Cisneros-Delgado was smuggling them into the country for money.

This is part of the scum that Obama, Jeb Bush, and many other politicians want to grant amnesty to which will essentially create an even bigger burden on our already failing justice system, healthcare system, and pose a criminal risk to citizens from coast to coast.

Next [PHOTOS] Here Are 17 People Who Shouldn't Have Kids