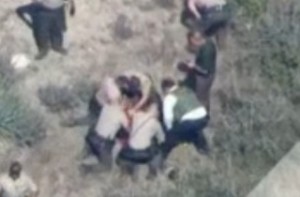 Ten California sheriff’s deputies were put on leave after a local news station captured aerial video of deputies beating and kicking a suspect who fell off the horse he was fleeing on.

In the video, taken by KNBC, Francis Pusok flees from the deputies on a horse. They had attempted to serve him a search warrant when he took off, first in a car, then on foot, and then on a horse, which he stole.

Pusok eventually falls from the horse, and deputies start to surround him and start beating and kicking him for a while. KNBC says he was punched around 37 times, kicked 17 times, and struck with a baton four times, and 13 of those blows were to his head.

This is the booking video of Pusok: 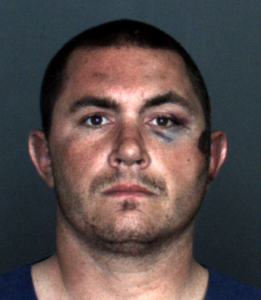 Watch the original raw video of the incident here, via KNBC:

And you can watch KNBC’s subsequent report below:

Next [WATCH] Rand Paul to LGBT Americans: You Can Have a ‘Contract,’ But Not Marriage