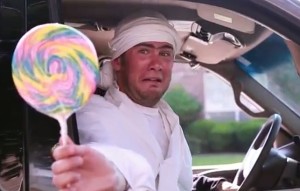 Though the video has been available for nearly two years, conservative comedian and commentator Steven Crowder told Western Journalism that his Jesus Vs. Muhammad project has received a significant boost in views since the recent terrorist attacks at the Paris-based satire magazine Charlie Hebdo.

With well over a half million views so far, Crowder explained that a significant number of those viewers took the next step of sending him death threats and hate mail. In that respect, he said, the second wave of virality the video has experienced is much like the first.

“Any time you are even remotely critical of Islam, or more importantly his ‘prophet’ (if you want to call him that), Muslims will react this way en masse,” he explained. “It has to happen. It always happens.”

When the video first reached a wide audience in 2013, Crowder noted that the details he delivered about Muhammad’s life led many viewers to admit they were uninformed.

He said he received “comments like, ‘I never knew that about Muhammad’ [and] ‘Can you point me to where it says that.’”

Soon after that “first wave of many people learning,” however, he recalled “thousands of down votes, spam comments and then death threats” posted below the video on YouTube.

“Muslims mobilize online very quickly,” he explained, noting the video has “been flagged repeatedly as hate speech as well.”

Furthermore, Crowder said he has received virtually no support from moderate Muslims.

“Even [musician and Muslim convert] Cat Stevens believes that Muslim-to-Christian converts deserve to die,” he said. “Even moderate Muslims believe in punishment for depicting Muhammad. No terrorism degree required. It’s a religion that not only is at odds with free speech, but one that demands its extermination.”

He said he has extended an invitation to the group TalkIslam, also known for its viral YouTube videos, to appear on his show and “correct” his portrayal of the faith, but it “doesn’t seem like they have any interest” in taking him up on the offer.

Despite the backlash, Crowder has not shied away from the subject of Islam and has produced several videos on the subject – many of which have been among his most viewed. He explains this phenomenon by saying that, “whether someone is watching the video to learn, to be entertained, or because some giant Islamic nonprofit sent them there to employ denial of service tactics, they have to watch the video.”

As for the death threats he has received as a result of this outspokenness, he said it has not caused him to consider self-censorship for his own safety. He does acknowledge, however, that his family’s welfare is always a concern.

While he confirms he has “taken greater measures” to protect his loved ones, Crowder concluded that “freedom of speech is just too damn important to let the bullies win.”