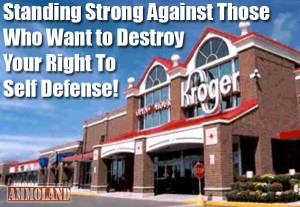 Fresh off an April 11 2015 Nashville rally where only 150 people showed up (vs the NRA’s 80,000) to support her, Moms Demand Action for Gun Sense in America founder Shannon Watts announced that her gun control group is officially boycotting Kroger until the grocer reverses policy and bans the open carry of guns.

Moms Demand Action launched their campaign against Kroger on August 18 2014, but the grocer quickly told them that they trust their customers to be responsible and would not be changing their policy.

Kroger affiliates Harris Teeter and Fred Meyer both told Moms Demand they would not be banning guns either.

So Moms Demand Action is stepping it up. On April 14 [freedom hater] Shannon Watts announced that Moms were not going to shop at Kroger until the grocer submits to their requests.


Watts said: “Moms will put our money will our mouths are and shop at stores that put our safety first.”

In doing this, Watts overlooked the fact that Kroger’s profit jumped “21 percent” for the third quarter of 2014 versus the third quarter of 2013–and this is after refused to ban guns. And she also forgets that Kroger is not the only business to reject Moms Demand Action’s gun-ban requests in the last year, but she is singling them out in hopes that they will cave under pressure.

The truth is, by rejecting Moms Demand Action, Kroger, Harris Teeter, and Fred Meyer, simply followed the path taken by Staples–who kicked Moms Demand off their property in March 2014–and Starbucks, whose CEO refused to ban guns in his coffee stores in spite of pressure from Moms Demand Action.

Next The New Inquisition