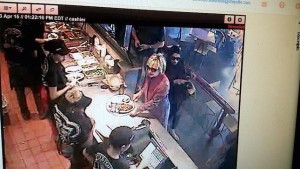 Maybe it’s because she and Bill were “dead broke” after leaving the white house. Maybe campaign contributions are rolling in as fast as she thought they would. Maybe it’s costing more to fill up the ol’ Scooby mobile than anticipated. But Hillary is a lousy tipper, according to the Chipotle manager in Maumee, Ohio. In fact, she stiffed the servers there. Hmmm. Not the best way to ingratiate yourself to the hard working middle class, Hillary. Just sayin’.

According to The Hill “The manager of an Ohio Chipotle restaurant on Wednesday said Hillary Clinton didn’t drop money in the tip jar during her visit earlier this week.

“Her bill was $20 and some change, and they paid with $21 and left,” Wright said of the Democratic presidential candidate’s spending.”

Perhaps the reason for the stiff was because none of the employees recognized her, her campaign chief, Huma Abadin and the rush lunch crowd didn’t seem to be impressed either. Perhaps a preview of things to come? If so, she’s in trouble.

Conservative radio host Rush Limbaugh raised the issue of Clinton’s tipping during his Tuesday broadcast. Her behavior was important, he argued, given the rhetoric of her campaign.

“But I would like to know if she left anything in the tip jar, because that would be an indication that she understands the average, ordinary, everyman that she seeks to represent,” Limbaugh said.

For a woman who wants to be the champion of the little guy, What kind of message does it send when she wouldn’t leave a $5 in the tip jar on a $20 lunch bill?

In case you missed it, here are some other great headlines!

University of Michigan walks back a decision to cancel a screening of the movie, “American Sniper.” In a statement released late Wednesday, the university president called the decision a mistake. As reported by FOX NEWS: University Vice President for Student Life E. Royster Harper called […]

TIME SENSITIVE!: Click-Read-Listen-Watch: The OBAMACARE REPEAL AND REPLACE IS A LIE!

Most Americans know Obamacare is NOT the answer to healthcare issues in the country. And since its passage, into law, Republicans have vowed to “Repeal And Replace.” What you need to know now is that Republicans are not really working to give […]

Political Correctness and social engineering are alive and well on college campuses and equally so at the University of Michigan. Muslim student protesters call Chris Kyle a mass killer and say American Sniper is racist. These protests prompted the university to cancel its screening, […]

Seriously! There’s a new version of the Bible and you won’t see any reference to God because all references have been replaced with Kanye West. No Joke. This so-called modern day Bible was created by Kanye fans and wanted to make a […]

No CCW Permit Needed To Carry In Kansas

Kansas is just one of a handful of states that have figured out our 2A had it covered when it gave us the right to keep and bare arms. As of July 1, 2015, Kansas residents will no longer need a permit […]

Pence/Hutchinson Cave On RFRA – Take Matters Into Your Own Hands To Protect Religious Freedom! Here’s How!

IF you have been watching the events for the last couple of weeks, regarding the RFRA in Indiana and Arkansas, one thing should have become painfully clear, if it wasn’t before. . . . GOVERNMENT IS NOT THE PLACE TO GO TO […]

While ThreePercentersNation.com was ahead of the curve on reporting this story, the rest of the country has now caught up on the news and the great politically correct pushback has begun. Last week, Indian Governor, Mike Pence, signed into law the Religious […]


Previous "F*ck You!" When A Man Is Accused of 'Stolen Valor', Things Get Heated [VIDEO]