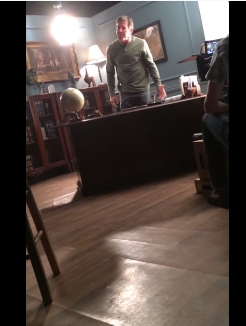 The following is either a Kimmel-concocted prank or a new video entry in the Hollywood hall of actors throwing tantrums on-set.

While on-set for an unidentified film, Dennis Quaid, 61, was caught throwing a tantrum at off-camera staffers after two of them were allegedly seen whispering to each other while the thespian was just trying to do his job, damnit.

“I am acting here, and this dickhead wanders onto my set,” Quaid shouted. “I can’t even get a line out until Dopey the Dick starts whispering in your ear, and you’re not even watching anymore.”

When someone, presumably the director, attempted to calm the actor, he continued to yell: “I am a pro. This is the most unprofessional set I have ever been on. This is horseshit! I’ve got these fucking zombies over here that I have to look at, I have a bunch of pussies staring at me, and this fucking baby!”

The video was first posted to YouTube last Friday, and picked up on Reddit as a “leak” from the set.

“This is garbage!” he finally screamed, before storming out — but not without uttering his final insult: “Blow me!”

Now, as we said above, there are two ways to look at this video: Lord knows it could very well be a Kimmel prank, as some have already suggested, or, it could be another instantly-quotable Hollywood freakout video. Previous installments included director David O. Russells on-set fights with Lily Tomlin while making I Heart Huckabees:

And, Christian Bale‘s infamous meltdown on the set of Terminator Salvation:

We’ll know soon which is the correct answer, when either Quaid or someone involved comments… or when the actor emerges on the set of Kimmel to point and laugh at us all.

Next "F*ck You!" When A Man Is Accused of 'Stolen Valor', Things Get Heated [VIDEO]