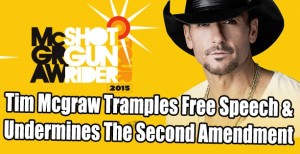 As reported On July 16 2015, country singer Tim McGraw along with Billy Currington will headline a fundraiser for gun control group Sandy Hook Promise in Connecticut.

Sandy Hook Promise is a vehicle through which various relatives of Sandy Hook victims have joined to push gun control until it passes. Newtown father Mark Bearden joined the group pledging to “dedicate the rest of his life” to pursuing gun control.

McGraw says he supports the Sandy Hook Promise, “Sandy Hook Promise teaches that we can do something to protect our children from gun violence“ and as AmmoLand Shooting Sports News has repeatedly reported the phrase “Gun Violence”, especially in Connecticut, is gun banner speak for more Gun Control.

Well 10,000’s McGraw fans did not take well to him kicking their 2A rights in the groin and took to McGraws Facebook page to protest. That is where the Mcgraw team decided free speech was bad too.

As the protest comment filled their Facebook page they proceeded to delete any unfavorable comments from pro gun fans.

Check out this comparison taken of McGraws FB vs Billy Currington’s FB page (who as of this report has not yet deleted all his fans protests). You can see the comments to Curringtons are overwhelmingly negative, while McGraw has purged all the backlash to hide his fans, or now ex-fans, fury over him siding with an east coast anti gun group.

To make the whole sordid tale even more ironic, Mcgraw’s 2015 Music tour is nicknamed the “Tim McGraw Shot Gun Rider Tour”. I am not making this stuff up.

In one bad move Tim McGraw has trampled the Free Speech and assisted in undermining the Second Amendment.

As our friends at Bearing Arms stated, he is “Poised To “Dixie Chick” Himself With Gun Control Benefit Concert“.

Sandy Hook Promise claims to “promote mental wellness, combat social isolation, and prevent gun violence,” but by far their strongest emphasis is on turning the public against the Second Amendment rights of Americans by subtly equating the support of gun rights with the murder of children, as their social media accounts clearly show.

A major push right now for the group is forcing the adoption of so-called “universal background checks,” which would prevent the private transfer or sale of firearms between friends and family members without a federal background check. The goal of such a system is to serve as de facto gun registry, and which serves no legitimate crime prevention purpose.


Previous [PHOTO] Here is the note that was left with $40 cash on a Deployed Marine Girlfriends car In Missouri!