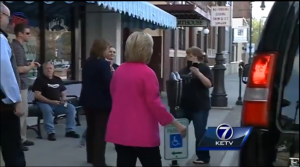 So, privilege usurps everything else when you are on the campaign trail. Hillary doesn’t blink an eye as she moves in and out of shops and schmoozes with supporters on the campaign trail. And scoring prime parking is important. Here is a video of Hillary walking out of a shop and breezing into her Scooby Doo Van, parked in a handicapped parking spot. So much for the little guy and the handicapped.

Get all the latest updates with the FREE DAILY HEADLINES APP! Download it NOW!

Here are some stories you may have missed! Check them out!

The Future Lier-In-Chief Changes History: Her Own!

It’s Just A LITTLE White Lie: Surprisingly CNN is stepping up and pointing out that Hillary is a LIAR. That’s something most of us, who are on the right side of the constitutional line, already know, but now, even some of the […]

Champion Of The Little People, Hillary, Too Tight To Tip

Maybe it’s because she and Bill were “dead broke” after leaving the white house. Maybe campaign contributions are rolling in as fast as she thought they would. Maybe it’s costing more to fill up the ol’ Scooby mobile than anticipated. But Hillary […]