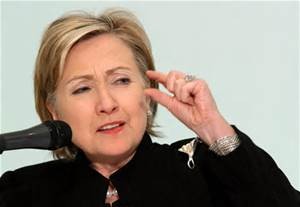 It’s Just A LITTLE White Lie: Surprisingly CNN is stepping up and pointing out that Hillary is a LIAR. That’s something most of us, who are on the right side of the constitutional line, already know, but now, even some of the left leaning “news” outlets are throwing stones at their queen.

While it is feasible to speculate that at least a few of the GOP candidates will be touting their own family history, as immigrants in search of the American Dream, however, Hillary Clinton does not have that advantage. She’s not letting that stop her.

At a recent campaign stop, in Norwalk, Iowa, Clinton inferred to the group, in which she was talking immigration, that she had several grandparents who were immigrants to the U.S., when, in fact, she only has one immigrant ancestor.

“all my grandparents, you know, came over here.”

“Her grandparents always spoke about the immigrant experience and, as a result she has always thought of them as immigrants,” a Clinton campaign spokesperson said on Thursday. “As has been correctly pointed out, while her grandfather was an immigrant, it appears that Hillary’s grandmother was born shortly after her parents and siblings arrived in the U.S. in the early 1880s.”

Perhaps if Elizabeth Warren gets into the race we’ll hear more about her native American heritage, or perhaps it’s just indicative of the Democrat playbook. Or maybe they think family trees are fluid, living breathing things like the Constitution.

It makes for good campaign mud slinging and the GOP intends to use it:


Republicans have already jumped on Clinton’s story in Iowa about her grandparents. A Republican aide said the Republican National Committee plans to go after her on it.

Sean Spicer, the RNC communications director, already tweeted about this story. “Dust off ur Bill Clinton dictionary,” he said, hinting at the former president’s “It depends upon what the meaning of the word ‘is’ is” statement during the Monica Lewinsky scandal.

Clinton’s family history has been a regular aspect of the former secretary of state’s remarks on the paid speaking circuit. She usually mentions her mother as her inspiration, nothing that Della Howell and Edwin Howell were not attentive parents and shipped their children off to relatives in California at a young age.

Get all the latest on this story and others by downloading, FOR FREE, the DAILY HEADLINES APP!

SHARE this story and check out what you may have missed!

MARINE GETS DUMPED BY CHEATING GIRLFRIEND. SEE HOW HE RESPONDS! CLASSIC!

While he is away, defending liberty, and the U.S. Constitution and culture, Becky decided that the stress of maintaining a long distance relationship was just …

COOL VIDEO! IS IT REALLY AS SIMPLE AS IT LOOKS?

Only in America can you take something as simple as a flip book and make it into viral art video. Creativity at its finest. So, …

WHY WOULD THIS GUY PUT ONIONS IN HIS SOCKS?

With all the hubbub about modern, western medicine over prescribing antibiotics and the general over use of prescription drugs there is a resurgence of alternative …

MISSOURI SCHOOL DISTRICT ELECTS FELON TO SCHOOL BOARD
On Tuesday, the Wentzville school district, in the St. Louis area, elected a felon to their school board. Michael Feinstein served 38 days in prison …

Ever wonder why the culture has gone to Hell? Take a look at these photos and ask yourself if you would let your kids be …

Ever eaten a pork steak, or gooey butter cake? If you’re from Missouri, it’s hard to understand the rest of the world doesn’t understand what, …
Read more

Previous [WATCH] Excitable Red Sox Fan Makes Life Hell For Everyone Around Him!!

Next Man Makes $20,000 In Counterfeit Money, But It Was What He Posted Online That Got Him Busted